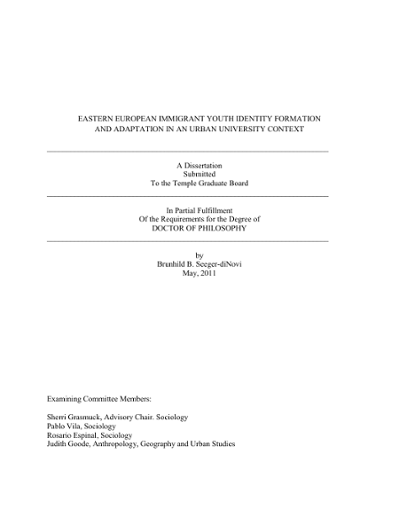 This study examines the childhood emigration, cultural and linguistic transitions and adaptation pathways of Eastern European immigrant students on an urban university campus. Although Eastern Europeans and immigrant children represent a substantial segment of the immigrant population in the U.S. they are understudied groups. After the collapse of the Soviet Union large numbers of migrants emigrated from the former Soviet Republics, but less is known about their experiences compared to other immigrant groups. Immigrant children have historically come to the U.S. since its inception but compared to the adult experience their status has been rendered ambiguous and their experiences marginalized to such an extent that they have largely been invisible in the literature. Commonly children are referred to as "children of immigrants" rather than assigned their own category of "immigrant children." While it is generally acknowledged that primary socialization of children influence their secondary socialization, the influences of child migrants' inculcation in the first culture, migration, acculturation and integration experiences with associated emotions have not been sufficiently considered. There is a general assumption in much of the immigrant scholarships that the cultural influences of the first country on child migrants are essentially negated by the acculturation process in the U.S., and this conjecture leads scholars to construct various generational categories that collapse immigrant children with the second generation native-born youth in their analysis thereby potentially skewing or obscuring critical outcome information. Since immigrant children's voices have largely been missing in the research process, through 34 in-depth interviews with Eastern European immigrant college students, we examined the extent to which the child migrants experienced the migration dislocation and incorporation as well as the possible lasting consequences in their adaptation pathways, self-identifications, social interaction, and standpoints on societal issues associated with emotional acculturation. Collectively, the Russian and Ukrainian immigrant students' narratives about their college experience indicated that they were meeting with success academically, were focused on individual goals, expressed appreciation for diversity, and were integrated into the social and professional organization on the university campus. However, most of the participants who emigrated during childhood reported that they had difficult or traumatic migration transitions in their first U.S. schools and neighborhoods, and often they recounted emotionally the memories of these profound events associated with their acculturation during the interviews. As a group, the Eastern European students expressed that both positive and negative immigration and transitional experiences, perspectives gained from the shared struggle with their parents, openness to diversity, achievement orientation, and work ethic are some of the differentiating characteristics that set them apart from their native-born American siblings, and the second-generation Russian and Ukrainian children of immigrants. Most of the Russian and Ukrainian immigrant students on campus socialized with other immigrants of diverse backgrounds, mainstream American students, least often with co-ethnics and rarely with second-generation co-ethnics or native minorities. When we conceptualize the social interaction boundary to include all immigrants, then the participants in this study may be considered "immigrant in-groupers" following in a modified form some of the findings of Grasmuck and Kim (2010) that investigated the social mixing patterns of four ethno-racial groups on the same campus. Although most of the participants had reported overall positive high school experiences, those who contended with social development issues, understanding the American culture, and the English language on the campus disproportionately represented those who had reported overall traumatic childhood integrations. As a group they embraced the ideology of meritocracy, and those who had reported traumatic childhood acculturation experiences more often adhered to the standpoint that white people were not more privileged and that equal opportunity exists for all. When we considered identity formation we found substantial complexity in the Eastern European immigrant students' self-identifications with a tendency to resist labels. Salient non ethnic (cosmopolitan/global/role) identity claims, hybrid or multi layered ethnic self-identifications that included salient non ethnic components emerged from their narratives. None of the participants identified solely as "American" but included it or referred to degree of "Americanization" as an element in their self-identification. The totality of the dominant patterns that emerged from the Eastern European immigrant students' narratives lend support for the standpoint that in research concerning outcomes for immigrant children, methodologies are warranted that take into account age at arrival, developmental stages, engendered emotions during childhood acculturation, and the standpoint of the foreign-born children. Concomitantly, the model of segmented assimilation does not theorize the potential impact of emotions on school age children who negotiate divergent peer contexts of reception without their parents. This investigation indicates that children's reaction to the nature of their acculturation may be manifested differentially when considering social psychological adjustment, adaptation, and mobility, and that the emotional legacy of childhood migration experiences ought to be considered at least equal to structural features such as governmental policies toward them, the composition of their enclaves, and labor market conditions.