SEEKING AND SHARING KNOWLEDGE USING SOCIAL MEDIA IN AN ORGANIZATION: THE IMPACT OF SOCIAL INFLUENCE, ORGANIZATION STRUCTURE AND SOCIAL CAPITAL 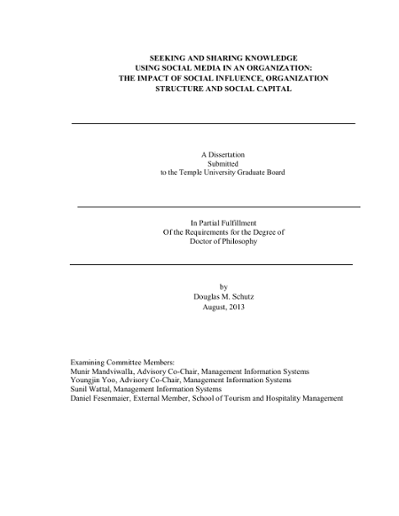 The prolific use of social media tools such as blogs and wikis is leading several organizations to adopt these tools. However, success of social media depends on its use by employees to share and seek knowledge. Based on a unique data set obtained from a large multi-national corporation, I examined three different aspects of knowledge seeking and sharing. First, I investigated two-sided network externalities on seeking and sharing. My analysis shows that significant network externalities occur not only at the demand side, which has been the primary focus in prior literature, but also at the supply as well as cross-sides (from supply to demand as well as from demand to supply). Second, I also explored the impact of hierarchical and geographical distribution on knowledge seeking and sharing. My results show that how a firm is structurally organized can yield different influences on the use of corporate social media based on whether the employee is seeking or sharing. Finally, I investigated the impact of social capital. New insights are captured in how different dimensions of social capital influence employee use of corporate social media for seeking and sharing knowledge within the organization.