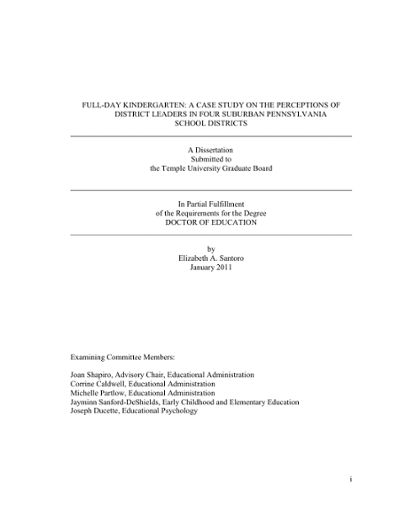 This qualitative study explored the reasons why suburban district leaders opted for full-day or half-day kindergarten programming in a sample of four local suburban districts operating such programs in Southeastern, Pennsylvania. The primary data source was interviews with key district leaders including school board members, superintendents, assistant superintendents, directors of elementary education, and directors of curriculum. Review of district documents as well as informal observations in the field were used to supplement the interview data. Suburban district leaders' perceptions, values, and opinions were examined in this study to determine how decisions for kindergarten programming were made. District leaders, especially superintendents, are charged with the enormous responsibility to program appropriately for the needs of their district. This study sought to reveal how such a critical but complex decision pertaining to kindergarten programming was reached in suburban communities. "Full-day kindergarten reappeared first in the 1960's as an intervention designed to help disadvantaged children catch up to their peers through additional schooling" (DeCicca, 2007, p. 67). Presently, full-day kindergarten appears to be gaining increasing momentum as more and more mothers are working to provide additional income for their families. The era of middle class stay at home moms has been on a decline due to the unstable economy, rising cost of living, single parent households, a greater need to supplement family income, to further their own self-development, and an opportunity for women to contribute to the workforce. Educators, on the other hand, remain divided on the issue of full-day kindergarten versus half-day kindergarten primarily due to funding issues, equivocal evidence of academic gains, and resource allocations. "Given the additional expense of full-day kindergarten, information regarding the size and duration of gains should be of great interest to policymakers" (DeCicca, 2007, p. 67). The recent push for full-day kindergarten has occurred at the state level. Whether the participation in a full-day program is associated with improved outcomes has been the focus of intense inquiry (Le, Kirby, Barney, Setodji & Gershwin, 2006). Kindergarten programming in the United States has changed considerably in the last 50 years as a result of state and local standards enforced in districts across the country. All that children needed to do in a traditional kindergarten was to play and adjust themselves to a social setting (Nelson, 2000). Now, kindergarten has evolved into another grade of academics where rigorous curricula have been implemented along with higher expectations placed on schools to succeed. The controversy arises over the inconsistencies with kindergarten programming, especially for suburban children. Suburban districts are continually challenged to meet the needs of all kindergarten learners as a result of the growing changes in demographics across the county. Due to the increased populations of English Language Learners and Economically Disadvantaged Learners, the challenge to program effectively for kindergarten students can be concerning to district leadership due to old mores that are no longer appropriate to program sufficiently. The intent of this study was to inform the reader about how complex decisions such as kindergarten programming were reached. Another intent of this study was to delve deeper into the perceptions, values, and opinions of those decision makers to gain a better understanding of the reasons why and how decision makers selected half-day or full-day kindergarten for their district. The methodology utilized in this qualitative study was a case study design. The researcher collected data through interviews with district leaders including school boards members, superintendents, assistant superintendents, directors of elementary education, and directors of curriculum. Observations in the field were conducted along with a review of key district documents such as strategic plans, school improvement plans, curriculum, and achievement data. The potential impact of this study was to inform the reader about the processes used by district leaders when making informed decisions about kindergarten programming. Suburban areas may benefit from this study because the results provided rich descriptive reports that can be utilized by parents, educators, policymakers, and the general public to gain a deeper understanding of suburban kindergarten in one state.