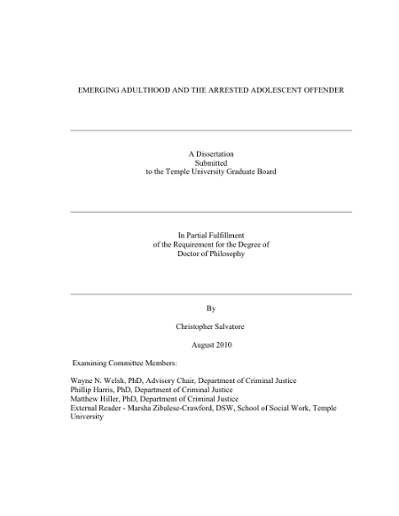 This study is an examination of how delayed transitions to adulthood have influenced the period of active offending for low-level offenders. This research has implications for the criminal justice system, its policies directed toward dealing with low-level offenders, and the branch of criminological research that explores offender taxonomies and the relationship between age and crime. Arnett's (2000) theory argues that emerging adulthood is a new stage of the life course, neither adolescence nor young adulthood, that is the result of several areas of social change. During this stage, despite having reached biological maturity, individuals postpone the achievement of adult commitments and responsibilities. Combined with a lack of traditional social bonds and a failure to meet various life course turning points, these individuals exist in a state of "arrested adolescence." During this state, many have the opportunity to explore their identities in areas such as romantic relationships and work. These explorations have also been theorized to include deviant and criminal behavior. While Arnett's theory has been cited extensively, only a handful of studies have attempted to empirically test its tenets with regard to delinquency or criminality. Prior research in life course criminology has established several different offender typologies linked to the impact of transitions to adult roles as turning points (for most) away from criminality (see for example, Laub & Sampson, 2003; Moffitt, Caspi, Rutter, & Silva, 2001). The present study answered the following research question; "Does the emerging adulthood stage of the life course influence offending trajectories?" Specifically, it predicted that emerging adulthood has delayed transitions to adult roles for those in their early to mid twenties. As a result, there is a higher rate of low-level, non-violent crimes such as vandalism and disorderly conduct for certain (arrested adolescent) offenders. Defined as a low-level criminal offender between the ages of 18 and 25, the arrested adolescent offender has yet to successfully transition to adult social roles (e.g., marriage, parenthood) that inhibit deviance and increase traditional social bonding. If Arnett's theory of emerging adulthood is correct, arrested adolescent offenders will continue to commit low-level offenses at rates typically seen in adolescents. Beyond examining this core question, this dissertation also extends Arnett's theory in three significant ways: by utilizing the theory to explicitly examine crime and deviance, clarifying how emerging adulthood influences offending, and by exploring whether the delay of turning points (e.g., marriage, parenting) and changes in social bonds (e.g., religious participation, bonds with family) influences offending. These questions were addressed using three waves of data from the National Longitudinal Study of Adolescent Health (Udry, 1998). At each wave of data, measures of crime, arrested adolescent vs. life course persistent offending (minor vs. serious) and drug use, arrested adolescent vs. life course persistent drug use (minor vs. serious) were examined as dependent variables. These indicators were selected from the crime and delinquency scales available in all three waves of the National Longitudinal Study of Adolescent Health. Arrested adolescent (minor) crimes consist of low-level offenses such as drunken and disorderly conduct and shoplifting. Arrested adolescent (minor) drug use is defined as using "softer" drugs such as alcohol and marijuana. Life course persistent (serious) crime is defined as more severe types of offenses such as burglary and selling drugs. Life course persistent (serious) drug use is defined as the frequent use of "harsher" drugs such as cocaine. These data were analyzed cross-sectionally using both bivariate and multivariate analyses. At waves 1 and 2, bivariate relationships between indicators of arrested adolescence and offending allowed an exploration of how these factors relate to offending during late childhood and adolescence. At wave 3, when members of the sample are in the emerging adulthood stage of the life course, a series of regression models examined how measures of arrested adolescence related to offending. The findings of this dissertation support the idea that many traditional turning points and social bonds do operate effectively during emerging adulthood. Turning points including education and hours worked were found to predict arrested adolescent offending. Social bonds including religious participation, economic stability, and parental attachment also were significant predictors of arrested adolescent offending. However, many of the other turning points, such as having children and military service, and social bonds, such as job satisfaction, that were found to be effective at reducing offending in other samples were not significant. Results suggest that specific turning points and social bonds are relevant factors in reducing offending for emerging adults. These findings, taken as a whole, suggest that emerging adulthood is a factor influencing offending. Emerging adulthood has the potential to alter patterns of offending over the life course, and there is a need for prospective longitudinal studies to examine the long-term influence of emerging adulthood on life course offending.