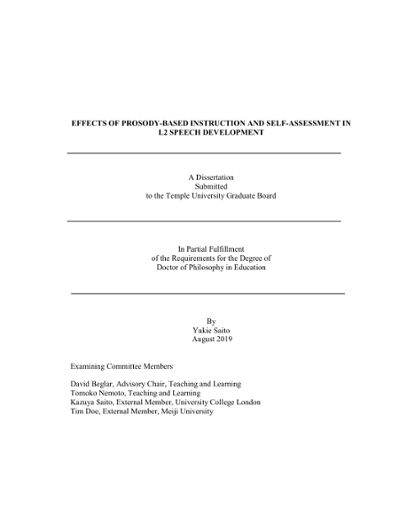 The main purpose of this study was to investigate the effects of form-focused instruction (FFI) on prosody with or without self-assessment on the prosodic and global aspects of L2 speech by Japanese EFL learners using a pre-post design. In addition, native English speaking (NS) and non-native English speaking (NNS) raters with high levels of English proficiency were compared to examine the influence of raters’ L1 backgrounds on their comprehensibility ratings. Sixty-one Japanese university students from four intact English presentation classes participated in the study. The comparison group (n = 16) practiced making one-minute speeches in class (45 minutes x 8 times) without explicit instruction on prosody, while the two experimental groups (n = 17 for the FFI-only group; n = 28 for the FFI + SA group) received FFI on word stress, rhythm, and intonation, practiced the target prosodic features in communicative contexts, and received metalinguistic feedback from the instructor. In total, the experimental groups received six-hours of instruction in class, which was comparable to the comparison group. Additionally, the experimental groups completed homework three times; only the FFI + SA group recorded their reading performance and self-assessed it in terms of word stress, rhythm, and intonation. Three oral tasks were employed to elicit the participants’ speech before and after the treatment: reading aloud, one-minute speech, and picture description. The speech samples were rated for comprehensibility by NS and NNS raters and were also analyzed with four prosodic measurements: word stress, rhythm, pitch contour, and pitch range. Instructional effects on prosody were observed clearly. The FFI-only group improved their controlled production of rhythm and pitch contour, while the FFI + SA group significantly improved all of the prosodic features except pitch range. Moreover, the instructional gains for the FFI + SA group were not limited to the controlled task but transferred to the less-controlled tasks. The results showed differential instructional effects on the four prosodic aspects. The FFI in this study did not help the participants widen their pitch range. The FFI on prosody, which was focused on the cross-linguistic differences between Japanese and English, tended to be more effective in terms of improving rhythm and pitch contour, which were categorized as rule-based, than an item-based feature, word stress. The study offered mixed results regarding instructional effects on comprehensibility. The FFI-only group did not significantly improve comprehensibility despite their significant prosodic improvements on the reading aloud task. Their significant comprehensibility growth on the picture description task was not because of the development of prosody, but of other linguistic variables that influence comprehensibility such as speech rate. The FFI + SA group made significant gains for comprehensibility on the three tasks, but the effect sizes were small. This finding indicated that the effects of FFI with self-assessment on comprehensibility were limited due to the multi-faceted nature of comprehensibility. The data elicited from the post-activity questionnaires and students’ interviews revealed that not all the participants in the FFI + SA group reacted positively to the self-assessment practice. Individual differences such as previous learning experience and self-efficacy appeared to influence the learners’ perceptions of the self-assessment practice and possibly their instructional gains. The two groups of raters, L1 English raters (n = 6) and L2 English raters with advanced or native-like English proficiency (n = 6) did not differ in terms of consistency and severity. These findings indicated that NNS raters with high English proficiency could function as reliably as NS raters; however, the qualitative data revealed that the NS raters tended to be more sensitive to pronunciation, especially at the segmental level, across the three tasks compared to the NNS raters. This study provides evidence that FFI, especially when it is reinforced by self-assessment, has pedagogical value; it can improve learners’ production of English prosody in controlled and less-controlled speech, and these gains can in turn contribute to enhanced L2 comprehensibility.