Philosophizing War: Arguments in the War on Iraq 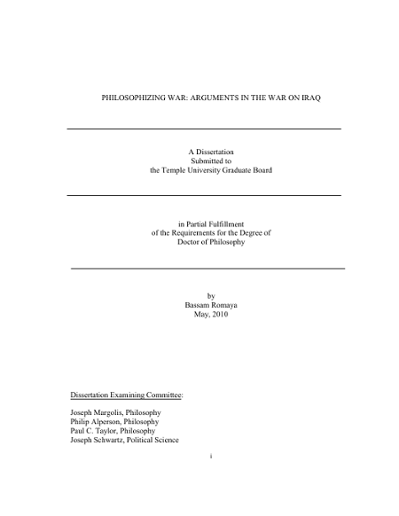 I set out to analyze four main philosophical arguments which have dominated the Iraq war debate. Each of these arguments has been used by philosophers to varying degrees to assess the circumstances surrounding the war. The discussions customarily focused on four key issues: just war theory, humanitarian intervention, democratization, and preventive war. In each case, I examine the argument's methods, shortcomings, and implications, to conclude that each fails to satisfactorily address, explain, or elucidate the highly controversial war. I argue that we simply cannot rely on a meager set of arguments to provide us with greater insight or genuine understanding of this war, as well as new or postmodern wars more generally. First, arguments that focus on the just war tradition overlook key events and underemphasize developments that have effectively eroded the tradition's defining concepts, such as the distinctions between combatant/noncombatant, states/non-states, victories/defeats, armies/non-state or non-nation actors. Second, theoretical analyses are routinely misappropriated or misapplied; this is especially evident in calls for humanitarian intervention, implemented for past harms committed, using backward-causing logic intended to make up for past inaction, rather than halting ongoing or imminent harm. Third, the focus on forcible democratization overlooks the high probability for failure in such pursuits and readily dismisses moral, legal, economic, educational, and cultural obstacles to democratic national building. Fourth, arguments which focus on preventive war suffer from similar problems encountered with the previous three, especially since it is unclear that the event could be characterized as a case of preventive war. The relationship between belligerent state and target state was not one in which the target state posed a future or distant threat to the belligerent state. Collectively, the arguments err in their uncritical acceptance of methodological analyses that have no genuine application to the matter at issue; that is, each misunderstands the nature of new or postmodern wars and clings to concepts relevant to modern wars, which do not factor in developments such as non-state actors, the spread of global capitalism, economic and cultural globalization, strategic objectives or military preeminence, imperialist aims or empire-building.