The Black Campus Movement: An Afrocentric Narrative History of the Struggle to Diversify Higher Education, 1965-1972 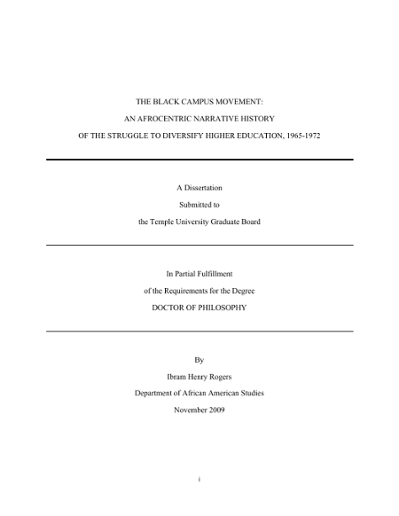 In 1965, Blacks were only about 4.5 percent of the total enrollment in American higher education. College programs and offices geared to Black students were rare. There were few courses on Black people, even at Black colleges. There was not a single African American Studies center, institute, program, or department on a college campus. Literature on Black people and non-racist scholarly examinations struggled to stay on the margins of the academy. Eight years later in 1973, the percentage of Blacks students stood at 7.3 percent and the absolute number of Black students approached 800,000, almost quadrupling the number in 1965. In 1973, more than 1,000 colleges had adopted more open admission policies or crafted particular adjustments to admit Blacks. Sections of the libraries on Black history and culture had dramatically grown and moved from relative obscurity. Nearly one thousand colleges had organized Black Studies courses, programs, or departments, had a tutoring program for Black students, were providing diversity training for workers, and were actively recruiting Black professors and staff. What happened? What forced the racial reformation of higher education? A social movement I call the Black Campus Movement. Despite its lasting and obvious significance, the struggle of these Black campus activists has been marginalized in the historiographies of the Student, Black Student, and Black Power Movements with White student activism, Black students' off-campus efforts, and the Black Panther Party dominating those respective sets of literature. Thus, in order to bring it to the fore, we should conceive of new historiography, which I term the Black Campus Movement. This dissertation is the first study to chronicle and analyze that nationwide, eight-year-long Black Campus Movement that diversified higher education. An Afrocentric methodology is used to frame the study, which primarily synthesized secondary sources--books, government studies, scholarly, newspaper and magazine articles--and composed this body of information into a general narrative of the movement. The narrative shows the building of the movement for relevance from 1965 to 1967 in which students organized their first Black Students Unions and made requests from the administration. By 1968, those requests had turned into demands, specifically after administrators were slow in instituting those demands and the social havoc wrought by the Orangeburg Massacre and the death of Dr. Martin Luther King, Jr. Instead of meeting with college officials over their concerns, Black students at Black and White colleges began staging dramatic protests for more Black students, faculty, administrators, coaches, staff, and trustees, as well as Black Studies courses and departments, Black dorms, and other programs and facilities geared to Black students. This protest activity climaxed in the spring of 1969, the narrative reveals. In response, higher education and the American government showered the students with both repressive measures, like laws curbing student protests, and reforms, like the introduction of hundreds of Black Studies programs, all of which slowed the movement. By 1973, the Black Campus Movement to gain diversity had been eclipsed by another movement on college campuses to maintain the diverse elements students had won the previous eight years. This struggle to keep these gains has continued into the 21st century, as diversity abounds on campuses across America in comparison to 1965.