Authenticity, Citizenship and Accommodation: LGBT Rights in a Red State 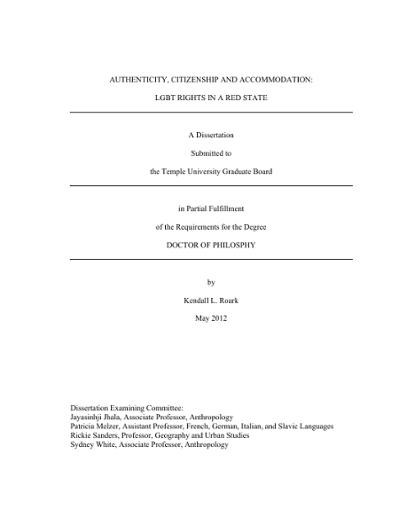 "Authenticity, Citizenship and Accommodation: LGBT Rights in a Red State" examines the discourse around volunteerism, exceptionalism, and queer citizenship that emerged within the context of a statewide (anti-gay) ballot initiative campaign in the American Southwest. I argue that the ways in which local volunteers and activists define themselves and their attempts to defeat the ballot initiative is tied to the struggle over the authority to represent local LGBT organizational culture and an emergent New West identity. In such a way, local debates over authentic western lifestyles that divide regional communities intertwine with intergenerational debates over gay liberation and rights frameworks, and the polarized discourse on blue and red states which have dominated the U.S. political climate of the past decade. While statewide campaign leaders with a base in Phoenix (the state capital) focused on polling data and messaging in order to stop the passage of the amendment, many Tucson activists and organizational leaders tied to the LGBT community center sought to strategize a long-term grassroots approach to change hearts and minds. Within this debate over campaign strategy and internal decision-making, both groups drew attention to the differences between the metropolitan areas. This regional example speaks to the ways in which established theoretical frameworks anthropologists utilize to understand social movements may prove insufficient for understanding the diversity that exists within the everyday processes of collective action. The internal messaging war that spilled outside of the confines of the campaign steering committee meetings into the pages of the statewide gossip and newspaper editorial sections also speaks to the ways in which official declarations of ideological stance should not be taken as the actual intent of those seeking change. One may shape one's personal story to be on message, choose to defy those constraints, or use the rhetorical strategy of the message without actually committing to the underlying premise. The broader national concerns are localized symbolically in the notion of blue and red counties, but also take on a regional flavor in the satirical call to statehood for the Southern Arizona. Here issues of authenticity emerge not only within the context of the campaign disputes around messaging, and by extension, who has the right to speak for and about the LGBT organizational community, but also in the realm of derisive banter that travels back and forth between the two major metropolitan areas over what it means to live an authentic western lifestyle. Within the southern metropolis, this discourse is framed by the notion that the western desert is a different sort of place, with a different sort of people and way of life that is threatened by snowbirds, retirees, Midwestern lifestyles and corporate interests. Often Phoenix to the north is seen as a representation of all these negative influences. In addition, Center-based activists and volunteers, describe their southern city in idealistic terms as an oasis for LGBT community, artists, activists, migrants, refugees, and all manner of progressive politics. Memory enacted through the telling of one's story at a Coming Out Day testimonial, political rallies and in dialogue with an anthropologist are shaped by these notions of difference. These notions of difference also emerge as a pattern in the narrative construction of space, violence and memory within activist life histories. These life histories in turn reveal a fragment of local LGBT organizational culture, in which the process of professionalization transforms the meaning of community, and the act of representation transforms the role of activist into that of the citizen volunteer. The community center in this sense is a memorialization of community and movement culture, and by idealizing what came before it masks material conditions at the same time that it offers up the potential of a more radical present/future. While the community center, Tucson and Pima County are coded as oases of safety, this image is continually disrupted by counter narratives, including the state-wide campaign to stop the marriage amendment; local support for the Protect Marriage and anti-immigrant amendments; and evidence of on-going violence directed against racial, ethnic and religious minorities and those who transgress hetero and gender normative expectations. These disruptions however appear to be cyclical in that they allow both professionals and concerned community members (citizen volunteers) to rally together in a show of strength and solidarity and in so doing represent the authentic, legitimate community. However, these disruptions may also allow for counter narratives to enter into public discourse, thereby offering up a more radical envisioning of community beyond the limits of LGBT organizational culture.