The genetic basis of sexual dimorphism in Drosophila and primates 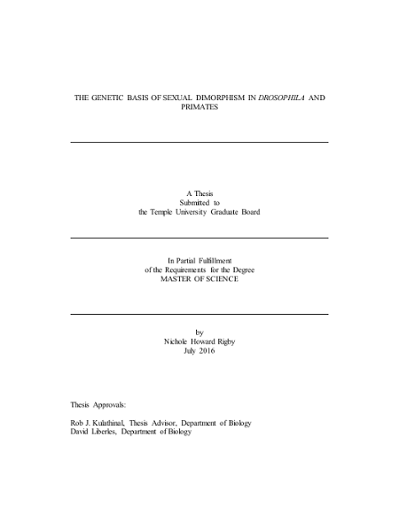 Sexual dimorphism, i.e., differences in morphology, physiology, and behavior between conspecific males and females, is ubiquitous, extensive, and often species-specific, indicative of its rapidly evolving nature. Ever since Darwin first described a general theory of sexual selection to explain the extraordinary differences between males and females of the same species, biologists have proposed a variety of mechanisms ranging from runaway selection to good genes to sexual conflict. While a popular approach is studying the effects of sexual selection on different components of fitness, the results of these studies are generally difficult to interpret and are typically not generalizable across populations, let alone taxa. Recent advances in the “omics” field are transforming the way that we study patterns and processes involved in sexual selection. At the molecular level, sexual dimorphism is present in gene expression differences between the sexes, providing a powerful framework to study sexual selection. By studying genes that are sex-biased in expression, we will better understand the underlying genetic basis of traits that are sexually dimorphic. Alreadly, studies of sex-biased genes in model organisms, particularly Drosophila, have revealed that male-biased genes are among the most rapidly evolving functional classes of genes. However, while a number of intrinsic factors appear to correlate with evolutionary rate (e.g., gene expression level, codon bias), it is unclear whether any of these factors drive the rapid divergence of male-biased genes. Another important discovery is the prevalence of sex-biased gene expression. However, even with widespread sexual dimorphism at the phenotypic level, it remains unknown the extent to which sex-biased gene expression exists in humans and their primate relatives. In fact, studies of sexual dimorphism on a molecular level in primates have been very few, even though understanding this phenomenon in humans could further our knowledge of the nature of sex-biased phenotypes and diseases. In this thesis, I advance our knowledge of the genetic bases and mechanisms that shape sexual dimorphism. First, I review a classic framework that biologists have traditionally applied to define and partition fitness measures between males and females in the model system, Drosophila. Second, I apply a molecular framework to compare the relative roles of intrinsic factors on the evolutionary rate of rapidly evolving male-biased genes in Drosophila. Third, I review the current state of our knowledge of sexual dimorphism and sex-biased gene expression in humans. Fourth, I present a bioinformatics framework to identify the extent of sex-biased expression in primate tissue and to examine the selective forces involved in their evolution. Overall, I demonstrate the effectiveness of using a functional comparative genomics approach in studying the nature of sexual dimorphism at the molecular level across multiple taxa.