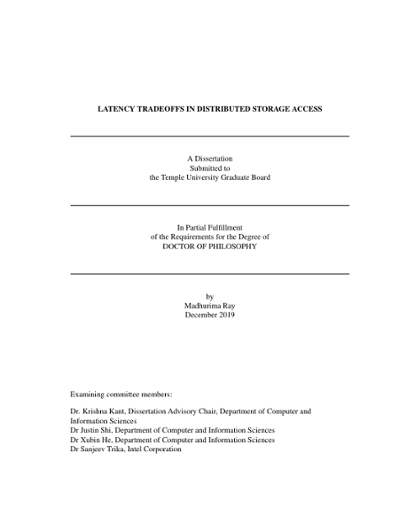 The performance of storage systems is central to handling the huge amount of data being generated from a variety of sources including scientific experiments, social media, crowdsourcing, and from an increasing variety of cyber-physical systems. The emerging high-speed storage technologies enable the ingestion of and access to such large volumes of data efficiently. However, the combination of high data volume requirements of new applications that largely generate unstructured and semistructured streams of data combined with the emerging high-speed storage technologies pose a number of new challenges, including the low latency handling of such data and ensuring that the network providing access to the data does not become the bottleneck. The traditional relational model is not well suited for efficiently storing and retrieving unstructured and semi-structured data. An alternate mechanism, popularly known as Key-Value Store (KVS) has been investigated over the last decade to handle such data. A KVS store only needs a 'key' to uniquely identify the data record, which may be of variable length and may or may not have further structure in the form of predefined fields. Most of the KVS in existence have been designed for hard-disk based storage (before the SSDs gain popularity) where avoiding random accesses is crucial for good performance. Unfortunately, as the modern solid-state drives become the norm as the data center storage, the HDD-based KV structures result in high read, write, and space amplifications which becomes detrimental to both the SSD’s performance and endurance. Also note that regardless of how the storage systems are deployed, access to large amounts of storage by many nodes must necessarily go over the network. At the same time, the emerging storage technologies such as Flash, 3D-crosspoint, phase change memory (PCM), etc. coupled with highly efficient access protocols such as NVMe are capable of ingesting and reading data at rates that challenge even the leading edge networking technologies such as 100Gb/sec Ethernet. At the same time, some of the higher-end storage technologies (e.g., Intel Optane storage based on 3-D crosspoint technology, PCM, etc.) coupled with lean protocols like NVMe are capable of providing storage access latencies in the 10-20$\mu s$ range, which means that the additional latency due to network congestion could become significant. The purpose of this thesis is to addresses some of the aforementioned issues. We propose a new hash-based and SSD-friendly key-value store (KVS) architecture called FlashKey which is especially designed for SSDs to provide low access latencies, low read and write amplification, and the ability to easily trade-off latencies for any sequential access, for example, range queries. Through detailed experimental evaluation of FlashKey against the two most popular KVs, namely, RocksDB and LevelDB, we demonstrate that even as an initial implementation we are able to achieve substantially better write amplification, average, and tail latency at a similar or better space amplification. Next, we try to deal with network congestion by dynamically replicating the data items that are heavily used. The tradeoff here is between the latency and the replication or migration overhead. It is important to reverse the replication or migration as the congestion fades away since our observation tells that placing data and applications (that access the data) together in a consolidated fashion would significantly reduce the propagation delay and increase the network energy-saving opportunities which is required as the data center network nowadays are equipped with high-speed and power-hungry network infrastructures. Finally, we designed a tradeoff between network consolidation and congestion. Here, we have traded off the latency to save power. During the quiet hours, we consolidate the traffic is fewer links and use different sleep modes for the unused links to save powers. However, as the traffic increases, we reactively start to spread out traffic to avoid congestion due to the upcoming traffic surge. There are numerous studies in the area of network energy management that uses similar approaches, however, most of them do energy management at a coarser time granularity (e.g. 24 hours or beyond). As opposed to that, our mechanism tries to steal all the small to medium time gaps in traffic and invoke network energy management without causing a significant increase in latency.