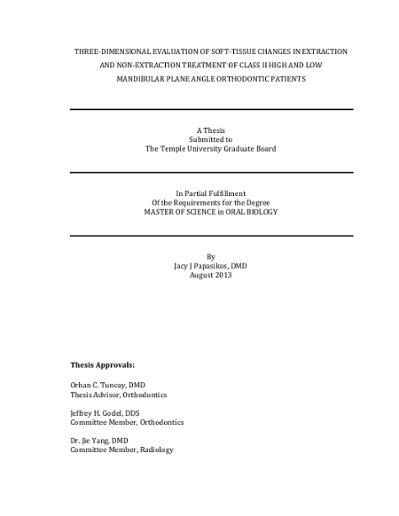 Facial esthetics affect an individual's quality of life, self-image, social behavior, and public perception. The oro-facial region, in particular, plays a pivotal role in facial esthetics as dento-facial deformities can cause an individual to be perceived as less attractive, less successful, and less socially acceptable. The ability of orthodontic treatment to alter the soft-tissue facial form makes it a powerful tool to improve facial esthetics. Orthodontic treatment exhibits the most control over the soft-tissue in the lower third of the face, specifically the profile, position of the lips, and lower-third convexity. The position of the soft-tissue in this region plays an important role in the perception of facial attractiveness. Due to the importance of the oro-facial region in facial esthetics, it is of the utmost importance that orthodontists better understand the effects of their treatment on the soft-tissue. The majority of literature evaluates soft tissue changes using 2-D imaging, such as a profile photo or lateral cephalogram; however, the evaluation of soft-tissue changes requires more than just what is seen in a 2-D sagittal image. It is essential that this knowledge is obtained in the most accurate and realistic way possible; to understand changes in three-dimensions instead of two. Using 3dMD technology, pre- and post- three-dimensional soft tissue images of dental Class II patients with high or low mandibular plane angle, treated with or without extraction therapy, were compared. The objective was to determine the effect of extraction treatment on the soft-tissue of different facial types. Subjects were sampled from a database of patients treated by orthodontic residents under the supervision of faculty at the graduate orthodontic clinic of the Maurice H. Kornberg School of Dentistry at Temple University in Philadelphia, PA. Pre- and post-treatment 3dMD images were obtained of 42 dental Class II, high-angle (FMA ≥ 28) and low-angle (FMA &lt; 28) subjects treated with extraction or non-extraction therapy. The 3dMDface system (3dMD, Atlanta, GA) is a stereophotogrammetric system used to capture 3D soft tissue images. Pre- and post-treatment images were superimposed to evaluate soft-tissue changes both quantitatively and qualitatively. Quantitative Analysis: The average linear (mm) changes between the pre- and post-images for each group were recorded for the following areas: right/left commissures and cheeks, upper/lower lips at the midline, chin (pogonion), and tip of the nose. In addition, sectional volumetric (cc) changes of the peri-oral area were recorded. The mean volumetric and linear changes were compared between groups. Qualitative Analysis: Color histograms were created from the superimpositions, representing a color-coded map of the direction and magnitude of soft-tissue changes. The magnitude and direction correspond to color, with warmer colors, such as pink and purple, representing positive changes in the soft-tissue (anterior movement) and cooler colors, like green, indicating a negative change (posterior movement). To allow comparison, the degree of change was coded using symbols, ranging from (+++) to (0) to (---), which correspond to the colors observed in each histogram. Coding was performed for the following areas: upper/lower lip, right/left commissures, right/left cheek, tip of the nose and chin (Horizontal (AP) and Vertical movement), the naso-labial fold, and the mento-labial fold. The coding for each facial area was placed in a table and color coded to aid visual analysis. The color-coded tables were analyzed for patterns within and between groups. While the quantitative analysis found no statistically significant linear and volumetric differences between each group, the qualitative analysis of the 3-D histograms revealed noticeable changes in the soft-tissue. Similar changes resulting from treatment type (extraction vs. non-extraction) were seen in both the high and low angle groups. The changes exhibited by the upper lip were independent of treatment and facial type: retraction was seen in all groups, likely due to Class II mechanics. In contrast, the changes exhibited by the lower lip, nasolabial fold, and mentolabial fold were more dependent on treatment type, becoming fuller in the non-extraction groups, while exhibiting more negative changes in the extraction groups. The commissures and cheeks exhibited unpredictable changes regardless of treatment and facial type. The nose and chin exhibited similar changes in all groups. These data suggest that orthodontic treatment may in fact induce predictable qualitative responses from specific areas of the soft-tissue face. We also conclude that qualitative assessment of soft-tissue facial change is more appropriate than quantitative assessment.