A TALE OF TWO STRESS MODULATORS: EFFECT OF DELTA OPIOID RECEPTOR AGONISM AND FKBP5 INHIBITION ON GENE EXPRESSION AND BEHAVIOR DURING COCAINE WITHDRAWAL 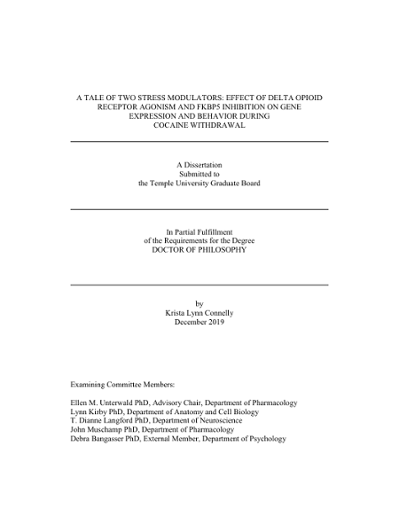 Addiction is characterized by compulsive drug use, loss of control over drug intake, and development of withdrawal symptoms when the drug is abruptly discontinued. The most substantial challenge for the treatment of substance use disorders is the prevention of relapse to further drug use once the user has become abstinent. Of all drugs of abuse, cocaine is most commonly involved in emergency department visits, and since 2013 there has been a rampant increase in overdose deaths involving cocaine. Symptoms of withdrawal from cocaine include anhedonia, sleep disturbances, intense cocaine craving, and negative affect such as anxiety and depression. Although the majority of cocaine users are men, women begin use at an earlier age, progress from use to dependence more quickly, and are more sensitive to stress during withdrawal. Women often experience more severe affective withdrawal symptoms, and likelihood of relapse is influenced by ovarian hormones. There is no current FDA-approved pharmacological treatment for cocaine use disorder; developing an effective therapeutic, especially for females is critical. One of the most common triggers of relapse is stress. Cocaine use, dependence, and withdrawal all activate the hypothalamic-pituitary-adrenal (HPA) axis stress system, which triggers the release of glucocorticoids from the adrenal cortex. The HPA axis is governed by a negative feedback system where released glucocorticoids inhibit the axis by binding to their own glucocorticoid receptors (GR). FKBP5 is a co-chaperone of the GR complex that forms an intracellular feedback loop modulating GR sensitivity that regulates HPA axis negative feedback. Aberrant FKBP5 function can lead to HPA axis dysregulation, which has been implicated in a number of stress-related and negative affective psychological disorders. As cocaine use develops into cocaine dependence, an extrahypothalamic stress circuit is recruited by a group of associated brain regions called the extended amygdala. The extended amygdala consists of the central nucleus of the amygdala (CeA), bed nucleus of the stria terminalis (BNST), and the shell of the nucleus accumbens (NAsh). These regions are highly interconnected by CRF neurons and regulate negative affect and stress-related responses during cocaine withdrawal. Delta opioid receptors (DOR) are involved in pain modulation and further play a role in the regulation of mood. Delta opioid agonists can reduce stress-induced and cocaine withdrawal-induced negative affect in rodents. Although the mechanism underlying this effect is unclear, DOR and CRF are colocalized in the CeA which provides an opportunity for interaction. Experiments presented in this dissertation were designed to first investigate the time course of regulation of stress-related genes (FKBP5, CRF, CRFR1) during withdrawal from chronic cocaine in the CeA, PVN, and BNST of rats, comparing males and females. We hypothesized that the DOR agonist SNC80 could attenuate withdrawal-induced increases in stress-related genes. We injected male and female rats with saline or cocaine for 14 days, before removal of brain tissue at five withdrawal time points. FKBP5, CRF, and CRFR1 mRNAs were measured by qRT-PCR. An additional cohort of rats was injected with SNC80 or vehicle twice before brain collection 24 hours post-cocaine. Our studies found that regulation of these genes following chronic cocaine is time-, sex-, and brain region-dependent. SNC80 attenuated withdrawal-induced increases in CRF mRNA in the CeA of females, but not males. Next, studies using intravenous cocaine self-administration investigated withdrawal-induced anxiety and stress-induced reinstatement in male and female rats. Here we hypothesized that the DOR agonist SNC80 and the FKBP5 inhibitor SAFit2 would alleviate cocaine withdrawal-induced anxiety, as well as decrease stress-induced cocaine seeking. Male and female rats underwent cocaine self-administration for at least 10 days before anxiety testing. Although males did not show an anxiety-like phenotype, both SNC80 and SAFit2 administration significantly reduced withdrawal-induced anxiety in female rats. Contrary to our hypothesis, SNC80 did not prevent stress-induced reinstatement to cocaine seeking in male rats. In fact, SNC80 administration exacerbated cocaine seeking in female rats. On the other hand, SAFit2 significantly reduced stress-induced lever pressing in males, while having no effect in females. After separating female data by estrous cycle stage, it was found that the effect of SAFit2 on stress-induced cocaine seeking in females may depend on estrous phase. Finally, data were evaluated to determine if there were sex differences in cocaine self-administration behaviors, and revealed that females acquired cocaine self-administration responding faster, earned more cocaine infusions, and reinstated cocaine seeking to a greater extent than males. Taken together, these results suggest that divergent regulation of stress-related genes between sexes, as well as estrous cycle phase, may be responsible for females’ increased susceptibility to cocaine relapse. On the contrary, while SAFit2 administration showed promising results in males, development of FKBP5 inhibitors for therapeutic use in females may be hindered by effects on FKBP5 complexed with estrogen or progesterone receptor.