Exploring the Pedagogical Aspects of Songs by Giacomo Meyerbeer: The Hidden Jewels of 19th-century Song Repertoire 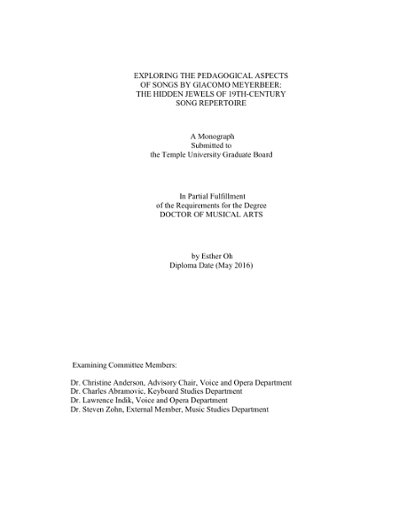 Giacomo Meyerbeer (September 5, 1791-May 2, 1864) was one of the most celebrated composers in the 19th century and the leading exponent of French grand opera. Meyerbeer's operas were immensely popular; for example, his opera Robert le diable was performed 100 times in Paris alone and was featured on the programs of 77 theatres in ten countries, all within three years of its première. Meyerbeer's collaboration with Eugène Scribe, who was the most famous librettist of the century, began with Robert le diable (1831) and their partnership continued for the creation of Les Huguenots (1836), Le prophète (1849), and L'Africaine (1865). Meyerbeer's larger-than-life operas defined the genre of French grand opera. Meyerbeer was a serious, dedicated composer who composed mostly for the stage, but he also wrote sacred music, choral music, instrumental music, and songs. Meyerbeer composed over 50 songs, mostly mélodies and lieder that were translated and published in both German and French. He also composed some Italian canzonette. Meyerbeer's songs are rarely performed in recitals, however, they have originality, beauty, intensity, and theatricality and are worthy to be explored, performed, and cherished. His operas featured unconventional and sensational scenes, tragic love stories set in the middle of the whirlwind of political and religious clash, and bigger-than-life sets to transport his audience to exotic, faraway places. Did Meyerbeer lend the same magical touch to his songs? Was he able to create the same story line of epic portion as he did in his grand operas? My goal is to provide an introduction to the Meyerbeer song repertoire which as a result will encourage more voice teachers, students, and professional performers to incorporate Meyerbeer's outstanding, yet rarely performed songs into their recital programs. In the charts, Meyerbeer's songs are organized by three language groups: Italian, French, and German, and are organized alphabetically by title within each language group. Each chart has eight columns: number; song title; lyricist; year of composition; range; additional available singing translations; difficulty level; and comments. Six songs in total, with two songs from each language group, are chosen and analyzed to explore Meyerbeer’s songs in depth. The selected songs are from various points of Meyerbeer’s career, and are of different levels of difficulties, topics, lengths, and moods.