They Saw Themselves as Workers: Interracial Unionism in the International Ladies' Garment Workers' Union and the Development of Black Labor Organizations, 1933-1940 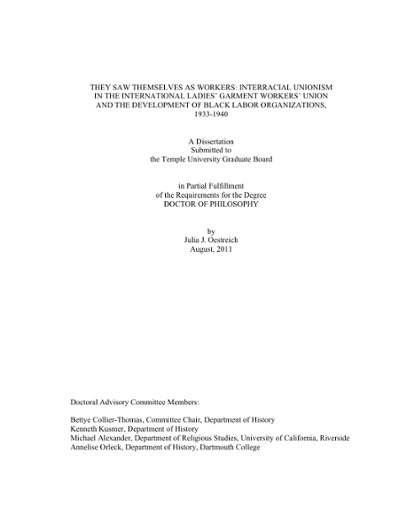 'They Saw Themselves as Workers' explores the development of black membership in the International Ladies' Garment Workers' Union (ILGWU) in the wake of the "Uprising of the 30,000" garment strike of 1933-34, as well as the establishment of independent black labor or labor-related organizations during the mid-late 1930s. The locus for the growth of black ILGWU membership was Harlem, where there were branches of Local 22, one of the largest and the most diverse ILGWU local. Harlem was also where the Negro Labor Committee (NLC) was established by Frank Crosswaith, a leading black socialist and ILGWU organizer. I provide some background, but concentrate on the aftermath of the marked increase in black membership in the ILGWU during the 1933-34 garment uprising and end in 1940, when blacks confirmed their support of President Franklin Delano Roosevelt, and when the labor-oriented National Negro Congress (NNC) was irrevocably split by struggles over communist influence. By that time, the NLC was also struggling, due to both a lack of support from trade unions and friendly organizations, as well as the fact that the Committee was constrained by the political views and personal grudges of its founder. Yet, during the period examined in "They Saw Themselves as Workers," the ILGWU and its Local 22 thrived. Using primary sources including the records of the ILGWU and various locals, the NLC, and the NNC, I argue that educational programming was largely responsible for the ILGWU's success during the 1930s, not political ideology, as others have argued. In fact, I assert that political ideology was often detrimental to organizations like the NLC and NNC, alienating many blacks during a period when they increasingly shifted their allegiance to the Democratic Party. Conversely, through educational programming that brought unionists of various racial and ethnic backgrounds together and celebrated their differences, the ILGWU assimilated new African American members and strengthened interracial working-class solidarity. That programming included such ostensibly apolitical activities as classes, dances, musical and theatrical performances, sporting events, and trips to resorts and places of cultural interest. Yet, by attracting workers who wanted to expand their minds and enjoy their lives outside of work to combat the misery of the Depression, the ILGWU cemented their devotion to the union and its agenda. Thus, through activities that were not overtly political, the ILGWU drew workers into the labor movement, and ultimately into the New Deal coalition in support of President Roosevelt and the Democratic Party. As the union flourished, part of an increasingly influential labor movement, it offered African American workers a better path to political power than the Negro Labor Committee or the National Negro Congress during the mid-late 1930s.