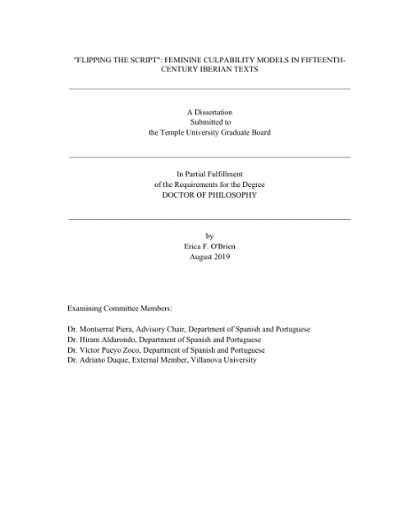 This dissertation explores the ways in which feminine culpability is verbally articulated by the male courtly lover to his beloved lady within the amorous relationship in three fifteenth-century Spanish sentimental novels: Diego de San Pedro’s Cárcel de amor, published in 1492, and two of Juan de Flores' sentimental novels, Grimalte y Gradissa and Grisel and Mirabella, both published in approximately 1495, and how these motifs of feminine culpability are subverted in the anonymous fifteenth-century Catalan chivalric novel Curial e Güelfa. This subversion of culpability motifs is facilitated in Curial e Güelfa since there is also a subversion of gender roles within the amorous relationship of the novel's protagonists: a female lover, Güelfa, who courts her male beloved, Curial. To execute this study, I begin by discussing the origins of this rhetoric of feminine culpability in patristic, Biblical and philosophical texts, illustrating their sedimentation into the collective ideologies of medieval audiences. I also examine these feminine culpability models in Provençal lyric poetry written and recited by Occitan troubadours between the eleventh and thirteenth centuries, as one of its particular genres, the mala cansó, aims to not only blame the beloved lady, but also to publicly defame her, a threat that is also ever-present in the words of the male lover in the sentimental novel. After analyzing the tactics used by the male courtly lover to blame the beloved lady for his suffering and the demise of the relationship, I demonstrate how these same tactics are employed by the female characters of Curial e Güelfa toward the beloved man. However, feminine blame still occurs in Curial e Güelfa, manifested as feminine self-blame and blame between women, while the male characters engage in self-absolution, absolution of other men, and utter shirking of the blame. The theoretical framework employed is that of medieval canon law, and the way in which culpability was determined under this law from the twelfth century onward, which was by the intentions of the offender at the time of the crime or transgression rather than the consequences of the transgression. If we examine these fifteenth-century courtly love texts, it becomes clear that the beloved lady is innocent, while the male lover himself is the culpable party. Finally, following Rouben C. Cholakian's reading of the troubadour poetry through the work of twentieth-century psychoanalyst Jacques Lacan, I conclude that although the poet-lover verbally enunciates erotic metaphors and adulating language toward his beloved lady in the guise of courtly love, the true desire that he cannot articulate is to dominate, to overpower, and possibly to eradicate the feminine. Thus, in a Lacanian sense the notion that courtly love literature praises the woman is a fallacy. Both the poet-lover of the Provençal lyric and the courtly lover of the sentimental novel subvert the concept of alleged feminine superiority and exaltation in these texts.