Breaking Through the Glass Cloister: The Sisters of St. Joseph of Philadelphia, Social Justice, and Gender Consciousness After Vatican II 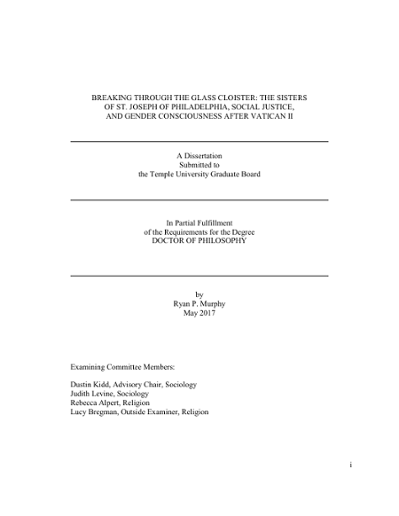 Since the Vatican’s widely-publicized criticism of American Catholic nuns in 2012, religious sisters have risen into the public consciousness. For decades, thousands of religious sisters in the United States have served within a rigid patriarchal Church that does not always recognize their contributions, yet relies on them to carry out its ministries. Through an emphasis on their missions of service to the poor and work for social justice, religious sisters emerged from this contentious situation with Rome as intelligent and dedicated women who lead dynamic lives that often go unnoticed. Through a case study of the Sisters of St. Joseph of Philadelphia, I analyze individual sisters’ lived experiences. In this research, I seek to understand the congregation’s institutional culture to uncover how religious sisters develop strategies to live out their mission of service to the poor and marginalized, and how they continue to advocate for social and structural change in the Catholic Church and in secular society. Specifically, I conducted interviews with 23 Sisters of St. Joseph and analyzed archived writings, letters, and congregational documents dating back to the late 1960s. I submit that over the past 50 years since the Second Vatican Council (Vatican II), the Sisters of St. Joseph actively embraced gender consciousness and social justice as a means of empowerment toward social change, despite the institutional pressures within the Church and society that discourage this. I argue that the progressive spirit and commitment to social justice indicative of a feminist orientation created a dissonance between religious sisters and Church leadership, while simultaneously increasing their integration into secular society. Ultimately, I contend that their congregational mission of unity and reconciliation, their status as sisters in a religious community, and privilege as educated women allows the Sisters of St. Joseph to be courageous risk-takers in advancing social and structural change in both the Catholic Church and the world. In addition to the 23 semi-structured interviews, I used qualitative content analysis to explore the congregation’s primary archival documents, especially those published from the periodic general chapters just after Vatican II through the most recent chapter in summer 2014. These chapter meetings are called roughly every five years, during which time the Sisters of St. Joseph elect congregational leadership and articulate the community’s organizational vision and direction. At each chapter’s conclusion, the congregation publishes a document(s) that informs its mission and work for the next several years. In addition to these public documents, I was granted access to the Sisters of St. Joseph congregational archives, where I analyzed notes, letters, minutes, voting records, proposals and enactments, and personal recollections of the general chapter meetings. In total, I analyzed nearly 300 documents from the Sisters of St. Joseph congregational archives. In my textual analysis, I used subjective interpretation of language in the text with particular attention placed on its content and contextual meaning in order to identify themes or patterns. Once I identified the major themes, I grouped them into three theoretical areas, which became the empirical chapters 4, 5, and 6 of this study. Chapter 4 argues that the sisters’ move toward active social justice work and advocacy after Vatican II is evidence of lived religion for this congregation. Chapter 5 analyzes how the Sisters of St. Joseph navigate issues of gender and sexuality in the Church, in their congregation, and in society. Chapter 6 looks at how the congregation contends with race and ethnicity within their own community, but also in the lives of the people they serve in their various ministries. Finally, in chapter 7, I conclude by examining how the congregation moved toward a more democratic, corporate structure focused on long-term viability in the decades after the Second Vatican Council. Ultimately, I argue that as the congregation evolved after Vatican II, they broke through what I call a “glass cloister.” Through the renewal process, the Sisters of St. Joseph emerged from decades of restriction as sisters reborn, reclaiming their original congregational focus and eager to live out their lives in service to others. As convent rules loosened and the sisters claimed their voices within the Catholic Church structure and in secular society, the congregation defined itself as a dynamic community of women dedicated to social justice and advocacy for the poor and marginalized.