Opposition, Discipline and Culture: The Civic World of the Irish and Italians in Philadelphia, 1880-1920 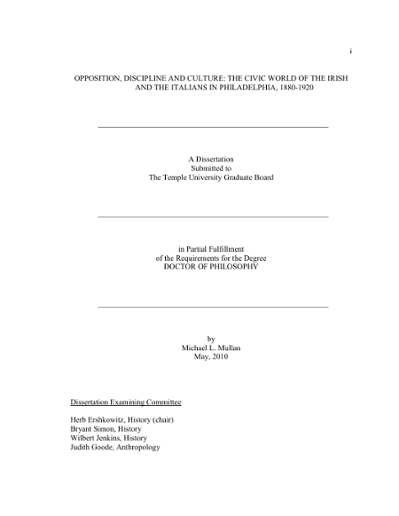 One of the stock assumptions that inhabits our understanding of the history of 19th- and early 20th-century immigration to an industrializing America is the wretchedness of the new immigrant laborers. The waves of new Americans from impoverished rural zones of emigration that swept into the nation were thought to be simple, rural people of limited skill for an advanced economy, unschooled in the norms of civic life, ignorant of democratic processes. Oscar Handlin was the original architect of this view; he saw the new ethnic groups as unsophisticated pre-moderns, and, as "peasants, they had not the background or skills to make their way in the economy of the New World." Whatever progress the new ethnic groups achieved in cultural and civic matters was attributable to learning and adapting to American influence, a process of assimilation that instilled social discipline in personal and public life and an appreciation for American democracy. This study challenges this assumption and relocates the locus of investigation overseas, to transnational sources of civic life in the pre-emigration lands of Ireland and South/Central Italy to explain the rapid rise and proliferation of ethnic voluntary associations in the late 1800s, early 1900s. The empirical universe is the Irish and Italians of Philadelphia; the time frame is 1880-1920, and the social site of investigation and analysis is the vibrant community life of ethnic voluntary associations the Irish and Italians constructed. This study also challenges a reading of the Irish associations in Philadelphia as little more than neighborhood clubs peopled by an aspiring upper strata of the Irish American community reaching for bourgeois values. This work suggests that the associations were populated by the working class, many born in Ireland, that substituted an ethic of solidarity for individual achievement values, a communal opposition to symbols of past oppression and agents of privilege. The Irish Americans of Philadelphia had cultural advantages prior to emigration, and they capitalized on this stock of common knowledge absorbed in native Ireland to transfer the norms, methods and moral codes of behavior from the Irish Friendly Society to the Irish American Beneficial Association of Philadelphia. However closely the Irish of Philadelphia followed the original transatlantic model, they ultimately molded their own style of ethnic association that elevated humanitarian communal values and constructed their civic life on a scaffolding of stable financial reasoning backed by a solid group discipline. The region of Abruzzo in South/Central Italy sent a disproportionate share of its rural people to Philadelphia in a massive chain migration that formed the Italian colony of South Philadelphia in the early 1900s. The Abruzzesse were a mountainous people defined by their rocky hilltop topography and a hard heritage derived from eking out an existence working rocky soil or shepherding; this was a mobile population cultured in the tradition of seasonal migration within Europe as the small farmers and rural laborers often spent months away from home in search of work to support their family and home. The rural proletariat of Abruzzo that eventually settled in Philadelphia also arrived with a rich civic heritage firmly intact, and the Italians capitalized on their knowledge and experience of an advanced civic culture based in local mutual aid to establish beneficial associations in Italian Philadelphia. In the process of following transatlantic models and in creating their own life, these ethnic groups constructed a collective consciousness mediated through the immediate community and educational mission of the ethnic associations. For the Irish, the association became the protective institution for a world view that defined Irish identity within the Diaspora as a community of exiles torn from cherished rural locations, a people bent on maintaining a vigilant eye on enemies such as the occupying British state in Ireland, on Irish landlordism and anti-Catholic agents in America, ever supportive of Irish nationalism. This consciousness grafted all kinds of imaginary symbols to its base, including race, a Social Darwinistic rendering of the Celtic type as superior to the Anglo Saxon, and a matrix of factors that conflated social class, nationalism, and sentimental remembrance into a hard opposition leveled at all forms of illegitimate privilege. The Italians were a mobile people of the mountains loyal to family and land, schooled in the rigors of migration, backed by the civic institutions of self-help they constructed in their agricultural towns; they were not burdened by the weight of sentimental nationalism as the Irish were in their Diaspora. Yet, during Italy's time of crisis during World War I, the Italian Americans of Philadelphia awakened national leanings and constructed a movement of national support for failing Italy. The Italian American associations of South Philadelphia came alive to sponsor financial and moral support for Italy at war, and a renewed Italian imperialism in the immediate post-war years. Thus, as the Irish and Italians drew on their old-world methods to create new civic institutions in Philadelphia, they also constructed separate ethnic identities and an active community, a vibrant energy that made industrial Philadelphia the home of the American voluntary association.