Principals, social reproduction, and moral leadership: An examination of how principals working in poor communities provide opportunities for their students 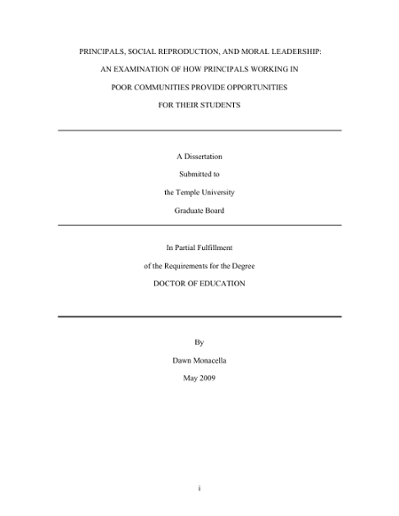 This qualitative study examined how 12 principals view their role as challengers of the propensity for social reproduction in the poor communities in which they work. The primary data sources were interviews with principals who work in rural, suburban, and urban schools that receive Title 1 funding. Review of school documents, community demographics and history, as well as observations were used to study the culture of the school and community that each principal works within. There are high costs to individuals and our society at large in providing substandard education and low levels of economic access. However, the social bifurcation of American society is at its highest level since the turn of the 20th century. Indeed, the Gini Coefficient, which is defined by PovertyNet as the most commonly used measure of fiscal inequality, is the highest it has ever been recorded in America. The Gini Coefficient identifies complete equality with the variable of 0 and complete inequality with the variable 1, currently places America’s level of inequality at a .46 (U.S. Department of Labor, Census Bureau Income). This qualitative study strived to determine how principals in poor communities see their role as challengers of the propensity of social reproduction in their communities. The federal Early Childhood Longitudinal Study (ECLS) summarizes the direct connection between education and success, “National policymakers and the public at large have increasingly recognized that the prosperity of the United States depends on the successful functioning of the American education system” (National Center for Educational Statistics, 2005, p. 21). Although the ECLS notes a clear connection between education and socio-economic success, the study goes on to report more than a million American students, whose families make less than $85,000 a year, start out a the top of their class but “fall off the college track on the way to high school” (as cited in Carnevale, 2007). Social reproduction theorists argue this overrepresentation of low-income students demonstrating low levels of school success is in large part due to a lack of social, political, and educational capital, which results in low-income and minority students being denied complete access to educational resources (Braddock & McPartland, 1987; Wilson, 1987; Bourdieu & Wacquant, 1992). Research has shown principals have an enormous impact on the effectiveness of schools, and ultimately, student outcomes (Grift & Houtveen, 1999; Marzano, Waters, & McNulty, 2005; Gurr, Drysdale, & Mulford, 2006). The impact of the principal can be pervasive throughout a student’s education. This impact includes, but is not limited to, the classroom, the school, as well as the community. Barth (1990) reports principals comprehensively affect their students as well as the community they work within, both inside and outside the school building. As it is clear principals have a significant impact on school, and specifically, student success, it is reasonable to assume they could also impact the likelihood for social reproduction among their students, especially those coming from poor communities. The findings of this study suggest an increased likelihood for principals working in poor communities to engage in challenging social reproduction if they apply a more nuanced understanding and application of the multiple ethical paradigms as well as consistently prioritize the building of positive relationships with stakeholders. The pattern that resulted from the conclusions indicate that principals who engaged in sophisticated ethical problem solving as well as consistent positive relationship building were also more likely to pursue extensive formal education, specifically doctoral degrees in educational administration.