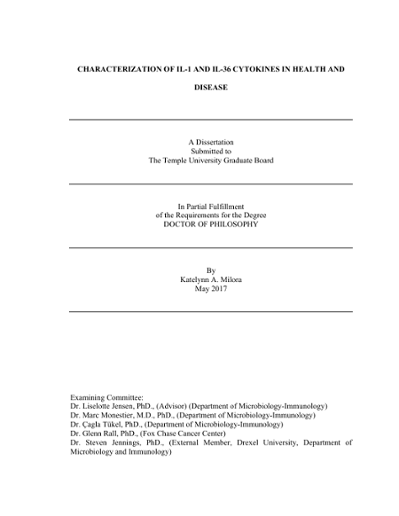 Epithelial cells are the first line of defense against invading pathogens and external threats in the environment. Keratinocytes, often not perceived of as immune cells, release cytokines in response to infection or injury to signal danger to neighboring cells and recruit effector leukocytes to prevent further damage to the host. IL-1 and IL-36 cytokines are a group of closely related proteins that share similarities in structure and function and have been shown to play key roles in inflammatory responses of epithelial tissues. While IL-1, consisting of IL-1α and IL-1β, have been widely studied and recognized as pinnacle cytokines in a variety of inflammatory responses, relatively little is understood about IL-36 cytokines since their discovery more than 15 years ago, and how they differ from their better-known IL-1 relatives. IL-36 cytokines, consisting of IL-36α, IL-36β, and IL-36γ, signal through the same receptor, IL-36R, which is expressed most abundantly on epithelial cells. IL-36 proteins garnered attention when it was discovered that a missense mutation in the gene encoding the naturally occurring receptor antagonist, IL-36Ra, was associated with the deadly form of psoriasis, generalized pustular psoriasis (GPP). This disease is characterized by episodic flares of keratinocyte hyperproliferation leading to red scaly lesions all over the body, excessive neutrophil recruitment to the epidermis resulting in pustule formation, and severe fever. Our data presented here demonstrate that IL-36α, but not IL-36β or IL-36γ is critical for the psoriatic phenotype, including epidermal thickening and neutrophil recruitment, generated during a murine model of psoriasis induced by the drug Imiquimod. Furthermore, IL-36α was found to induce IL-1α expression and vice versa through a signaling feedback loop which perpetuated disease. These data provide insight into mechanisms whereby IL-36 signaling can lead to excessive inflammatory effects in patients with pre-existing regulation deficiencies, which can lead to acute flares of disease. Beyond their association with disease, IL-1 has been shown to contribute to anti-bacterial and anti-viral responses of the immune system by upregulating inflammatory signals and chemoattractants. Herpes Simplex Virus-1 (HSV-1) is a human pathogen that has developed several strategies to manipulate elements of the immune system to avoid detection by the host. One such mechanism is the prevention of activation and release of IL-1β from infected cells thereby blocking its pro-inflammatory responses. Our data show that keratinocytes infected with HSV-1 actively release IL-1α to alert danger to neighboring cells to circumvent this blockage of IL-1β signaling. This release of IL-1α initiates recruitment of leukocytes to early HSV-1 microinfection sites resulting in increased protection against disease, as evident by the increased mortality rate of mice deficient in the IL-1 receptor, IL-1R1. This study, for the first time in vivo, demonstrates the ability of IL-1α to act as an alarmin to initiate an immune response to combat infection. The role of IL-36 cytokines during viral infections has been less defined than that of IL-1. Several studies have shown the upregulation of IL-36 expression during viral infections in epithelial tissues, such as HSV-1 and Influenza, yet a direct link has not been established between these proteins and anti-viral responses. Our research presented within this thesis show that IL-36β, but not IL-36α nor IL-36γ, provides protection against the lethal outcome of cutaneous HSV-1 infection, as demonstrated by IL-36β knockout mice dying earlier and more often than wild type mice. Surprisingly, while previous reports have found IL-36 cytokines to be capable of activating the adaptive immune system, our results found no significant differences in development of HSV-1 specific antibodies or CD8+ T cell development between wild type and IL-36β knockout mice. Furthermore, we found no significant differences in viral copy numbers at infection sites between the two groups. Although our data show that IL-36β clearly plays a critical role in controlling the outcome of HSV-1 infection, further studies are necessary to define the mechanisms behind this protection. The final section of this thesis focuses on the endogenous nature of IL-36 cytokines, specifically IL-36γ, and their potential processing. IL-36 cytokines were originally believed to be synthesized as full-length fully active proteins; however, large concentrations of the recombinant proteins were required to elicit cellular responses in vitro. Since then, studies have shown that IL-36 cytokines gained up to 1000-fold increases in reactivity following processing at very specific N-terminal locations of each individual cytokine, however this processing has never been shown to occur in vivo. These studies were recently expanded when neutrophil proteases were found to be responsible for processing of these proteins in vitro. Data presented here show, for the first time, that IL-36γ may be endogenously processed by neutrophils in wounded murine skin in vivo, yet, the amino acid processing site appears to be different from that predicted. Although further studies are required to fully characterize the nature of this processing, these data provide valuable insight into the natural mechanisms involved in the potential activation of these cytokines. Taken together, the research presented within this thesis sheds light on the mechanisms whereby IL-1 and IL-36 cytokines enhance immunological defenses against potential threats, and yet, can contribute to disease if unregulated. Furthermore, these studies demonstrate the evolutionary advantage of producing multiple cytokines that appear to have redundant roles within the body, yet can provide multiple levels of protection to the host. This knowledge contributes to our overall understanding of these proteins and their contribution to immunological systems within the body.