AN ASSOCIATION BETWEEN A STRUCTURED WALKING PROGRAM AND COGNITIVE FUNCTION, BALANCE, MOBILITY, AND ACTIVITIES OF DAILY LIVING IN PERSONS WITH ALZHEIMER'S DISEASE 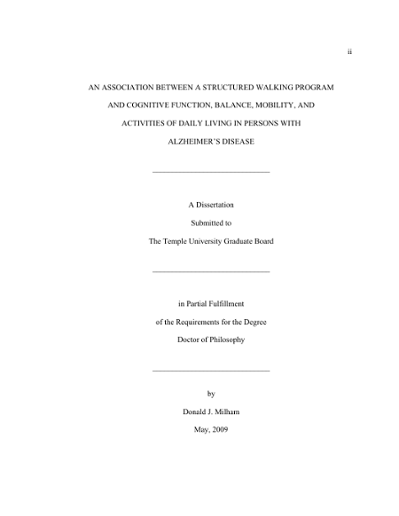 Alzheimer’s disease (AD), an age-related neurodegenerative disorder, progresses across a continuum of severity that leads to serious neurological dysfunction and eventually death. Initially manifesting as mild impairment in cognition and executive function, AD eventually leads to serious disturbances in memory, decision-making, language, mobility and sensing the environment. AD affects approximately 27 million people worldwide, over 5 million in the United States alone, and is one of the most debilitating diseases that costs society billions of dollars annually and is a primary cause of death in the elderly. Pharmacological treatments produce only moderate symptomatic benefits and do not attenuate or prevent the progression of AD with some medications associated with increased symptomatic behavior such as decreased motor function and increased likelihood of falls. Conversely, research utilizing animal models indicates exercise may play an important role to attenuate AD symptoms and delaying AD onset as regular aerobic activity increases the expression of brain-derived neurotrophic factor, a peptide that plays a major role in neural function, neural plasticity, and attenuation of neuritic plaque; a ß-amyloid derived plaque that is recognized as the primary cause of neural degradation associated with AD. To examine this exercise hypothesis, participants (N = 19; mean age 85.5 ±5.2 years) completed a single treatment, regular walking activity over time (30-min per day, 3 days per week for 12 weeks), with pre-test post-test evaluations undertaken utilizing valid research instruments designed to measure cognition, executive function, and motor capabilities in persons with AD. T-test with repeated measures ANOVA with various categorical variables as between-group factors were used to test the hypothesis. Analysis of change indicated significant change occurred in Cognitive function [t(18) = 5.74, p &lt; .001], Balance [t(18) = 7.43, p &lt; .001], and Mobility [t(18) = 3.82, p &lt; .001], with no significant change in Activities of Daily Living (t[18] = 1.48, p &lt; .156). A significant decrease in the number of falls was also found (z = 2.392, p &lt; .017). No main effect was associated with AD stage, gender, or education level. The results of this study indicate regular aerobic activity enhances neural function in persons with AD, thus supporting the exercise hypothesis which posits regular aerobic exercise attenuates AD symptoms and delays AD onset. While the results provide important evidence regarding the impact of aerobic exercise on neural function in the AD populations, further research is necessary to identify the mechanisms by which brain-derived neurotrophic factor is induced with exercise and to examine the effectiveness of different exercise modalities (e.g., specificity, duration, and intensity) on neural function in the AD population.