"To Proclaim Liberty to the Captives": The Pan African Orthodox Christian Church and Its Relationship to Black Liberation Theology 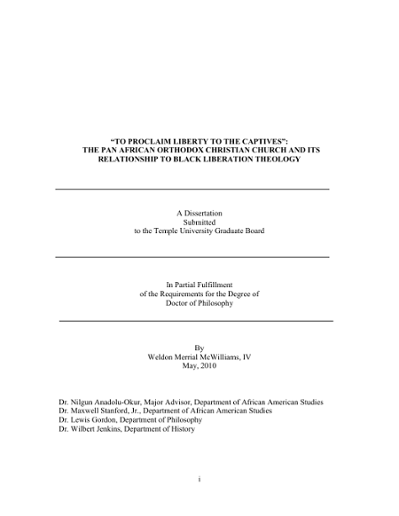 While examining the theology of Black Liberation and its contemporary relevance there are several questions that must be explained. Is there still a need for Black Liberation Theology within Christianity? What makes Black Liberation theology different from other Christian theologies? In recent years Christianity has had to dispute the notion that it is the "White Man's religion" and that Black People cannot benefit from the faith. How is this so if the majority of Black people in the United States identify Christianity as their faith? How have Black people benefited from this religion in the past and present? My research is two-fold. The first part of my research will focus on the history of Black Liberation Theology, its concepts and the historical and contemporary relevance. Black Liberation Theology, as an intellectual enterprise began in the late 1960's. Many credit James Cone with bringing a theology of Black Liberation into the forefront of intellectual discussions at educational institutions. Black Liberation theology seeks to answer the question "What does it mean to be Black and Christian in America?" James Cone posed the question and attempted to answer it in his first two books, Black Theology and Black Power, (1969), and A Black Theology of Liberation, (1970). Although Cone is often times seen as one of the pioneers of the Black Theology of Liberation, in actuality this movement has a very long history and its beginnings can be found in the freedom acts of Black people and the Black Religious experience in America from the time of enslavement (David Walker, Nat Turner, Denmark Vesey, Gabriel Prosser to name a few), through the abolitionist movements (James Forten, Henry Highland Garnett, William Wells Brown, Harriet Tubman, Richard Allen, Absalom Jones), continuing through the early to mid 1900's (Noble Drew Ali of the Moorish Science Temple, Elijah Muhammad of the Nation of Islam and Malcolm X of the Muslim Mosque Incorporated), the Civil Rights Era (Martin Luther King, Vernon Jones, Fred Shuttlesworth, Pastors of Baptist Churches in the American South), the Black Power/Black Arts Movements (Albert Cleage, Jr. of the Shrine of the Black Madonna). It stills functions in contemporary times with the recent resurgence of interest in the subject matter through the media's emphasis on the rhetoric of Rev. Jeremiah Wright and his congregation at Trinity United Church of Christ in the south side of Chicago, whose remarks were seen as controversial and almost jeopardized the candidacy of Senator Barack Obama to the Presidency. Black Liberation Theology holds the position that one's faith should encourage one to fight injustice and oppression on behalf of those who are oppressed and downtrodden. Christianity must be examined holistically which means that the religion carries a socio-political component as well as a spiritual one. Black Liberation Theologians believe that one cannot be concerned with reaching a "heavenly ever after" if he/she has not worked to heal his/her society from the social ills that exist. Working toward freedom and liberation is Christian work. These two must be seen as one and the same; you can't have one without the other. The second part of this study aims to examine a church that has made claims to preaching and putting Black Liberation Theology into practice. The Pan African Orthodox Christian Church (PAOCC) is a Christian denomination that seeks to utilize its religious institution as a tool to implement social change. Followers of this denomination believe the Black Church must utilize its resources and take advantage of its independent position, in order to bring forth freedom and liberation for people of African descent, and they attempt to do this within their place of worship. Dr. Martin Luther King best summarized the mission of the PAOCC best when he stated: [A]ny religion that professes concern for the souls of men and is not equally concerned about the slums that damn them, the economic conditions that strangle them, and the social conditions that cripple them is a spiritually moribund religion only waiting for the day to be buried. It well has been said: "A religion that ends with the individual ends (Clayborne, 18). My research aims to indicate that there is still a need for a theology of Black Liberation in the United States. Through careful analysis of Black Liberation Theology and the Pan African Orthodox Christian Church (PAOCC) this research will demonstrate how Black Liberation Theology has been the way that most men and women of African descent have traditionally accepted Christianity on those terms until two important events in African American history occurred: the end of the institution of enslavement; and the end of the Civil Rights Era. My research demonstrates how the PAOCC exemplifies a Black Liberation Theology. Lastly my research will also show that it is possible to be Christian and Afrocentric, which goes against the prevailing dictation of Afrocentric thought. There are Afrocentric scholars who make the claim that one cannot be both Afrocentric and Christian. My research ultimately intends to state that Afrocentricity should not antagonize the faith, but the Western practice of Christianity and its dominant theology as well as its practice.