STAGES OF RECOVERY IN INDIVIDUALS WITH DEEP TO PHONOLOGICAL DYSPHASIA: INSIGHT INTO TREATMENT APPROACHES 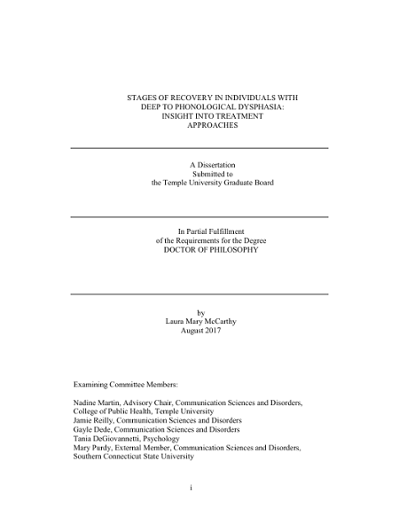 The presented dissertation grew out of the need to achieve a better understanding of the relationship between language processing and short-term memory (STM) in persons with aphasia (PWA). Deep dysphasia and phonological dysphasia form a classification of aphasia identified by a pattern of speech errors attributed to chronic verbal STM impairment. Exploring evidence demonstrating the pattern of speech errors mediated by STM impairment in PWA, research objectives were three-fold: • To add to the knowledge base on deep dysphasia and phonological dysphasia and extend the characteristic presentation of this; • To determine the characteristic profile of recovery in deep dysphasia, providing further evidence that deep dysphasia is an impairment that exists at the most severe point along a continuum of recovery which in milder form demonstrates phonological dysphasia. • To evaluate the efficacy of treatment approaches developed on the basis of Dell and O’Seaghdha’s (1992) two-step interactive activation model of word production and using repetition to improve verbal STM and word processing. First, a comprehensive systematic review of the deep dysphasia and phonological dysphasia literature base was conducted. This review addressed the paucity of case studies reporting the diagnoses of dysphasia. Studies investigated individuals with chronic STM impairment in the auditory modality as well as other characteristic markers of deep and phonological dysphasia, such as an imageability effect. In repetition tasks, an imageability effect indicates that concrete (high-image) words are repeated with greater ease when compared to accuracy in the repetition of abstract (low-image). The review supported the hypothesis that these profiles reflect a chronic impairment of auditory-verbal STM existing on a continuum of severity. Evidence from this review supports the hypothesis that deep dysphasia and phonological aphasia are two points on a continuum of an impairment mediated by verbal STM (Martin, Saffran & Dell, 2006, Willshire & Fisher, 2004). Second, with the insights from this review, a single-subject multiple-baseline, multiple-probe treatment study was undertaken. The participant LT presented with a pattern of repetition consistent with the continuum of deep-phonological dysphasia, including an imageability effect in repetition (Martin et al., 1996, Wilshire & Fisher, 2004). This treatment approach sought to directly remediate language and short-term memory abilities using a repetition task targeting imageability effect. In order to improve access to and repetition of low-image (LI) words, this approach aimed to enhance semantic context. Results of this study indicate improving LT’s access to abstract word pairs improved verbal STM as well as language processing. Third, the single-case study led to the development of a four-condition, multi-participant facilitation study that aimed to improve access to and repetition of LI words by embedding them in a context that enhanced their imageability. The goal of this manipulation was to increase the probability of accessing lexical and semantic representations of abstract words in repetition by enriching their semantic-syntactic context. Ten participants with chronic impairment in verbal STM demonstrated that this approach participants’ ability to repeat those words when presented in isolation. Evidence from PWA has confirmed that a damaged language processing system includes disruption to STM (Martin & Saffran, 1992; Martin et al., 1996; Martin & Saffran, 1997; Martin & Saffran, 1999; Martin & Ayala, 2004; Kalinyak-Fliszar, Kohen, & Martin, 2011; Allen et al., 2012). Recent investigations have provided evidence that STM tasks can be used as mechanisms to improve language processing (Kalinyak-Fliszar et al., 2011; Salis, 2012; Berthier et al., 2014). Despite the central role repetition plays in functional communication and the difficulties PWA encounter with repetition due to STM impairment, few treatment approaches have targeted STM and the language processes supporting repetition (Martin, Kohen, & Kalinyak-Fliszar, 2010; Kalinyak-Fliszar, 2011; Berthier et al., 2014). This dissertation research filled that void and demonstrated the promise of clinical approaches that directly target language processing and auditory verbal STM impairment in PWA.