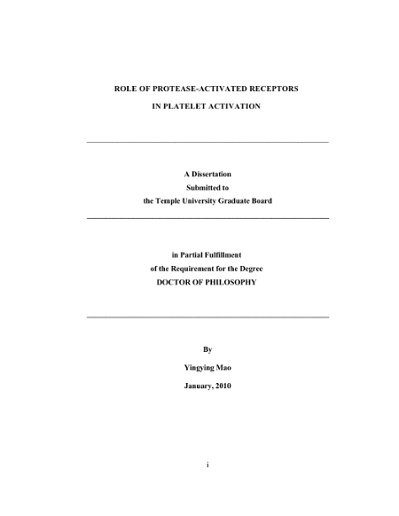 Platelets act as a fundamental component of the hemostatic process and their activation leads to the formation of a stable clot at the injured endothelium surface. Thrombin, as the important physiological agonist, activates platelets through protease-activated receptors (PARs). Protease-activated receptors are one of the major receptors in platelets and belong to the seven-transmembrane G-protein couple receptor family. Four protease-activated receptors are found, named as PAR1, PAR2, PAR3 and PAR4. Human platelets express PAR1 and PAR4 and murine platelets express PAR4 and PAR3 instead of PAR1. Thrombin activates PARs through a unique mechanism, involving the cleavage of N-terminus of PAR receptors and the newly exposed N-terminus acts as its own tethered ligand to bind and activate the receptor. In this study, we characterized a new PAR1 specific activating peptide (TFRRRLSRATR), generated from the c-terminus of human platelet P2Y1 receptor, and evaluated its biological function. This peptide activated platelets in a concentration-dependent manner, causing shape change, aggregation, secretion and calcium mobilization. Its activation is completely inhibited by using BMS200261, a PAR-1 specific antagonist. Its specificity to PAR1 receptor is further confirmed by using TFRRR-peptide-pretreated washed platelets and murine platelets. The shape change induced by 10 microM peptide was totally abolished by Y-27632, an inhibitor of p160ROCK which is the downstream signal of G12/13 pathways. The TFRRR-peptide, YFLLRNP, and the physiological agonist thrombin selectively activated G12/13 pathways at low concentrations and began to activate both Gq and G12/13 pathways with increased concentrations. Similar to SFLLRN, the TFRRR-peptide caused phosphorylation of Akt and Erk in a P2Y12 receptor-dependent manner, and p-38 MAP kinase activation in a P2Y12-independent manner. The effects of this peptide are elicited by the first six amino acids (TFRRRL) whereas the remaining peptide (LSRATR), TFERRN, or TFEERN had no effects on platelets. Beside thrombin, PARs also can be activated by other proteases. Previous studies in our lab show that plasmin, a major extracellular protease, activates both human and murine platelets through prototypical cleavage of PAR4 (Quinton et al., 2004). In this study, we continue our study and investigate the molecular basis for the differential activation of murine and human platelets by plasmin. Plasmin-induced full aggregation is achieved at lower concentrations (0.1 U/mL) in murine platelets as compared to human platelets (1 U/mL). In COS7 cells expressing the murine PAR4 (mPAR4) receptor, 1 U/mL plasmin caused a higher intracellular calcium mobilization than in cells expressing the human PAR4 (hPAR4) receptor. This difference was reversed when the tethered ligand sequences of mPAR4 and hPAR4 were interchanged through site-directed mutagenesis. This difference between human and murine PAR4 is not because of the cofactor effect of PAR3 in murine platelets by showing that in both transfected cell lines and platelet system, PAR3 inhibits plasmin-induced PAR4 stimulation. All of the data suggest that murine platelets are more sensitive to activation by plasmin than human platelets due to differences in the primary sequence of PAR4. In contrast to thrombin-dependent activation of platelets, wherein PAR3 acts as a co-receptor, mPAR3 inhibits plasmin-induced PAR4 activation. Abnormal platelet activation causes thrombus formation and induces pathological conditions including stroke and atherosclerosis. Antithrombotic therapy is a widely used therapeutic method for stroke. However, currently used agents based on the irreversible inhibition of the platelet cyclooxygenases 1 and 2 or inhibition of P2Y12 receptors can cause unexpected bleeding or resistant side effects. Antithrombotic therapy targeting thrombin signaling is one of the new treatments under investigation and PAR1 antagonists are now in clinical trials. In this study, we investigate the effect of one of thrombin receptors, protease-activated receptor 4 (PAR4) in mice transient middle cerebral artery occlusion/ reperfusion (tMCAO/R) model. Our data show that PAR4 -/- mice have more than 80% reduction in infarct volume and significant improved neurological and motor function after 1 h MCAO followed by 23 h reperfusion. Examination of cellular responses to tMCAO/R indicates that PAR4-/- mice have less cellular death. Platelet/endothelial and leukocyte/endothelial interactions have been shown to play a critical role in the inflammatory responses during cerebral ischemic/reperfusion injury. Comparing wild-type with PAR4-/- mice platelets/endothelial and leukocyte/endothelial interactions, deficiency of PAR4 causes a significant decrease in both platelet/endothelial and leukocyte/endothelial interactions. In addition, PAR4-/- mice attenuate blood-brain barrier (BBB) disruption during tMCAO/R. All the data suggest that deficiency of PAR4 will protect against brain ischemic injury though attenuation of cerebral inflammatory responses including inflammatory cells extravasation and BBB disruption. Protease-activated receptor 4 (PAR4) is the only thrombin receptor existing in both human and murine platelets. The data we get in this study also have a beneficial effect for human study and inhibition of PAR4 may provide a novel potential therapeutic strategy for ischemic injury.