DEVELOPMENT OF NOVEL METHODS FOR THE RAPID SEPARATION OF BIOMOLECULES 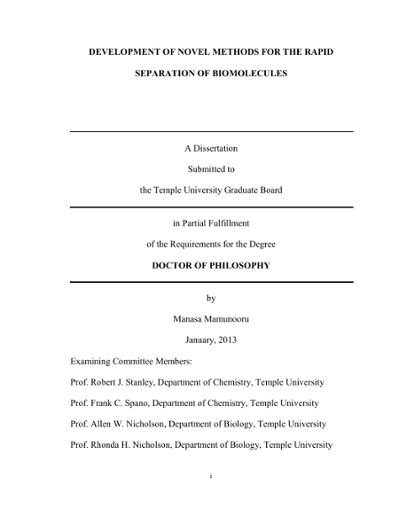 Successful methods for the separation of biomolecules like amino acids, proteins, peptides, and DNA have been developed previously using HPLC, GC, GC-MS, and CE. Recently CE has become a routine laboratory technique in the analysis of biological molecules. Even though high-resolution separations with small sample volumes is the main advantage, CE is limited by lower sensitivity detection of analytes when universal detectors like UV absorption or refractive index detectors are used. Therefore, sensitivity enhancement can be obtained by either using different detection schemes or electrophoretically based pre- or on-line concentration methods. These can be grouped into two categories. The first category includes IEF, CGF or TGF where sensitivity is achieved through equilibrium electrofocusing. In these methods, electrophoresis and bulk solution is combined in the capillary or separation column to form a null velocity point, a point at which the net velocity of the analyte is zero. Using these methods 10-10,000 fold sensitivity enhancement is achieved. The second category uses velocity gradients but not the nul velocity for the enrichment of samples. These methods include FASS, LVSS, NSM, etc., which are applied for the analysis of small molecules, and 10-10,000 fold sensitivity enhancement is reported by using these methods. In this work, first GEITP an on-line preconcentration technique is applied for the detection of amino acids (using Trp and Tyr as model analytes). This work also established the effects of different parameters on enrichment. The parameters studied include effect of current flow acceleration across capillary inner diameter, the effect of leading electrolyte (LE) concentration on current density, and the effect of applied electric fields on the current density. To explore the application of GEITP in biological fluids, optimized parameters were developed for the detection and separation of Trp and Tyr in artificial cerebrospinal fluid (aCSF). Next, GEITP was applied for enrichment and separation of physiologically relevant concentrations of chromophore-derivatized Asp and Glu in high conductivity samples like artificial cerebrospinal fluid (aCSF). It was concluded from this work that the major factors which influence the enrichment is the ratio of current density to sample conductivity. Finally, GEITP is applied as a prior step before CZE to increase the resolution between analytes without using ampholyte mixtures. In this method GEITP was combined to CZE to achieve resolution adjustment between amino acids mixture using low pressure hydrodynamic flow during CZE without changing the separation column, field strength, or electrolyte system. In this work, a rapid CE method for extraction and analysis of amino acids in planarians, labeled with 4-Fluoro-7-nitro-2,1,3-benzoxadiazole (NBD-F), was developed. This method was applied to detect the changes in the levels of amino acids when planarians were fed and starved. This method can be applied to study pharmacological effects in planaria, as it can monitor different amino acid levels with respect to feeding. Finally, ssDNA photoproducts of different lengths (11-mer and 63-mer) were separated using two different matrices, a traditional C18 and a PV/DBS (PLRP-S) matrix. A faster separation (within ~ 10 mins) was achieved for a 11-mer by the PLRP-S column. A separation was achieved in the PLRP-S column for the 63-mer while there was no separation in C18 column. Baseline resolution was not achieved. Therefore, C18 can best be used for small length DNA while PLRP-S can be applied for longer length DNA, as it is more hydrophobic than C18 column. Parameters can still be optimized for a baseline separation.