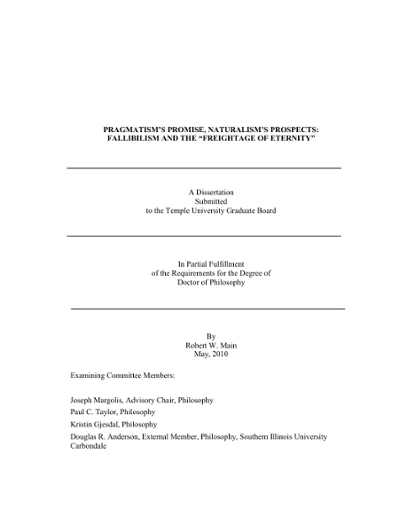 This dissertation traces the development of classical American pragmatism in the work of C.S. Peirce and Josiah Royce, and its convergence with the naturalist project that currently dominates anglophone philosophy. I argue that naturalism, as it is typically construed, either neglects or underestimates the importance of a rich and nuanced model of selfhood, one that captures not only the biological, but also the cultural features of human persons; what is needed is an account that shows how culture and human selves are themselves "natural." John McDowell has recently offered a promising line of thought which pursues this intuition, but his model has faced heavy criticism and its viability remains questionable. My project, then, is an alternative account that incorporates the best of McDowell's intuitions, but which is immune to the most common objections brought against his model. I proceed by focusing on one aspect of what it means to be a human person that has enormous significance for all areas of philosophical inquiry and which has a rich, if often overlooked, philosophical history. This is the inherent finitude or ignorance which characterizes human knowledge and practice, what Peirce referred to as "fallibilism." Peirce's notion of fallibilism, which today remains his greatest legacy, tempers philosophical discussions of universal concepts such as truth and "the good" by way of considerations of scope and context, forcing such abstractions to find their place within the practical environments of actual lived existence. I offer that Peirce is perhaps a unique figure in the Western philosophical tradition with respect to the importance he gives to fallibilism and in his understanding the doctrine not only in terms of its negative consequences, but also a positive theory that generates a practical response to the sort of existential crisis introduced by the recognition of human fallibility and finitude. Ultimately, Pierce offers a naturalized model of the self which is both a semiotic artifact and communal in nature. The self is a sign that emerges within an interpretive community and which manifests itself as an individual primarily through its fallibility. As such, the self is a cultural artifact, but Peirce's metaphysics makes this a natural process continuous with those processes studied by natural sciences. As a scientist, he was committed to naturalism but not reductionism; his account, therefore, embraces the work of culture and the importance of cultural idioms which are often left out of modern naturalist projects. In this, Peirce offers a promising way to fulfill McDowell's project of "naturalizing" culture and "re-enchanting" nature, thereby eliminating the gap between "mind and the world." However, despite its importance to his philosophical system, Peirce's explicit treatment of selfhood is notably unfocused. It is therefore necessary to couple his philosophical system with that of another of the classical pragmatists who was deeply influenced by Peirce's philosophy but who extended its development into detailed discussions of selfhood and community. The figure I have in mind is Josiah Royce. Royce's philosophy hinges on two central notions, loyalty and community. Loyalty is, for Royce, the means by which individual selves are connected with communities and moral concerns. For Royce, loyalty is given first and foremost to an individual community. However his development of this concept comes to include loyalty to loyalty itself, thus making an individual's loyalty to a particular community continuous with a loyalty to a global community. Moreover, his account of community picks up on Peirce's semiotic theory of interpretation, and connects his account of the individual with Peirce's metaphysical and epistemological concerns. I read the theory of selfhood Royce develops as providing the crucial element that Peirce's philosophical system requires but does not explicitly provide. Throughout this discussion, I show how this model is a promising direction for the future course of contemporary philosophical naturalism.