The Role of Mitochondrial Calcium Exchange in Cardiac Physiology and Disease 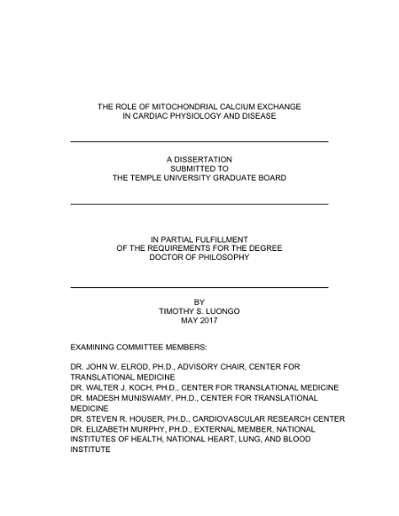 The high metabolic demand of the heart makes it essential that an efficient and tightly controlled system be in place to regulate energy production. Contractility is mediated by a variable flux in intracellular calcium (iCa2+), which is proposed to be integrated into mitochondria to regulate cardiac energetics. Moreover, mitochondrial Ca2+ (mCa2+)-overload is known to activate the mitochondrial permeability transition pore (MPTP) and induce cell death. However, the true function of cardiac mCa2+ in physiology remains unknown. Recent studies have reported that the Mcu gene encodes the channel-forming portion of the mitochondrial calcium uniporter (MCU) and is required for mCa2+ uptake (Baughman et al., 2011; De Stefani, Raffaello, Teardo, Szabo, & Rizzuto, 2011). To examine the role of mCa2+ in the heart, we generated a conditional, cardiac-specific knockout model and deleted Mcu in adult mice (Mcu-cKO). Loss of Mcu protected against myocardial ischemia-reperfusion (IR) (40 min occlusion of the left coronary artery (LCA) followed by 24h reperfusion) injury by preventing the activation of the MPTP. We observed a 45% reduction in infarct size per area-at-risk and a 65% reduction in cardiac troponin-I serum levels from 24h post-IR. In addition, while we found no baseline phenotype or change in baseline mCa2+ content, Mcu-cKO mice lacked contractile responsiveness to β-adrenergic receptor stimulation (isoproterenol infusion) as assessed by invasive hemodynamics, and, in parallel, were unable to activate mitochondrial dehydrogenases, thereby decreasing tricarboxylic acid (TCA) cycle flux and cardiac NADH. We found that Mcu-cKO mice had a 3-fold increase in pyruvate dehydrogenase (PDH) phosphorylation and a 50% decrease in PDH activity post-isoproterenol infusion. Further experimental analyses in isolated adult cardiomyocytes confirmed a lack of energetic responsiveness to acute sympathetic stress (isoproterenol failure to mediate an increase in oxidative phosphorylation capacity) supporting the hypothesis that the physiological function of the MCU in the heart is to modulate Ca2+-dependent metabolism during the ‘fight or flight’ response. However, questions still remain on how basal mCa2+ levels are regulated and if it contributes to cardiac disease. The mitochondrial sodium/calcium exchanger (mNCX) is hypothesized as the primary mechanism of mCa2+ efflux, but to date no study has confirmed its identity or function in an in vivo system (Palty et al., 2010). To investigate the role of mNCX in the heart, we generated mutant mice with loxP sites flanking exons 5-7 of the candidate gene, Slc8b1, and crossed them with a tamoxifen-inducible, cardiomyocyte-specific, αMHC-Cre mouse to delete mNCX in the adult heart (mNCX-cKO). Biophysical study of cardiomyocytes isolated from mNCX-cKO mice revealed a significant reduction in mCa2+ efflux rate. Tamoxifen-induced deletion of Slc8b1 in adult hearts caused sudden death with less than 15% of mice surviving after 10 days. Echocardiographic evaluation of mNCX-cKO hearts 3d post-tamoxifen revealed significant left ventricular (LV) remodeling, characterized by significant dilation and a substantial decrease in function. In addition, mNCX-cKO hearts exhibited increased reactive oxygen species generation when assessed by DHE imaging of live myocardial tissue and mitoSOX Red imaging in isolated adult cardiomyocytes. Using an Evan’s blue dye exclusion technique, we found that mNCX-cKO hearts displayed significant sarcolemmal rupture (~8% of all myocytes at a single time point 3d post-tamoxifen), indicative of cellular necrosis. To rescue the sudden death phenotype and acute loss of cells, we crossed our mNCX-cKO mice with the cyclophilin d (a mediator of MPTP-opening) knockout mice. mNCX-cKO x CypD-KO mice had a significant improvement in survival and LV-function. In addition, loss of MPTP activation also rescued mitochondrial pathology on the subcellular level. Since deletion of mNCX was detrimental on cardiac function, we thought that increasing mNCX could protect cardiomyocytes by reducing mCa2+-overload during cardiac disease. To test this, we generated a conditional, cardiac-specific mNCX overexpression mouse model (mNCX-Tg) to assess if increasing mCa2+ efflux would prevent cardiac injury in multiple pathological surgical models. mNCX-Tg and controls were subjected to in vivo IR injury followed by 24h reperfusion and myocardial infarction (MI) (permanent LCA ligation). mNCX-Tg mice displayed reduced cell death (a 43% reduction in infarct size 24h post-IR and a 33% reduction in scar size 4w post-MI), preserved LV function, a reduction in ROS generation, and a decrease in numerous HF indices. For the first time, we showed that mNCX is essential for maintenance of the mCa2+ microdomain in cardiomyocytes and that mNCX represents a novel therapeutic target in HF.