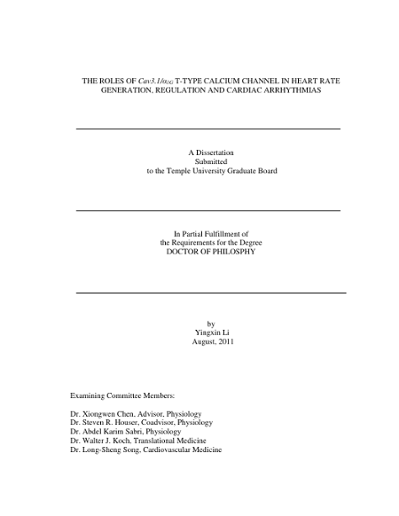 T-type Ca²+ channels (TTCCs) are expressed in cardiac pacemaker cells and conduction system of mammals. However, the roles of TTCCs in heart rate (HR) generation and regulation, and arrhythmias are not well understood. In the mouse, the major TTCC expressed in the heart is Cav3.1/a1G, and therefore we used Cav3.1/ 1G transgenic (TG) and knockout (KO) mice respectively to define the role of TTCC in the heart rate generation, regulation and arrhythmias. Telemetric (conscious) and surface (anesthetized) electrocardiogram (ECG) were used to determine the baseline HR and the effect of isoproterenol (ISO) on the HR in vivo. To reduce the complication of in vivo HR regulation, Langendorff ECG (a technique to record ECG from the surface of Langendorff-perfused, spontaneously-beating, mouse hearts) was used to measure HR at baseline and after ISO stimulation. The basal firing rates and ISO-induced dose-response on the firing rate of sinoatrial nodal cells (SANCs) were studied. Whole cell voltage clamp was used to study the effects of ISO on ICa-L and ICa-T and the underlying mechanism with ventricular myocytes of 1G DTG (Cav3.1/a1G double transgenic) mice. The ICa-T before and after ISO application on a1G DTG, KO and control SAN cells were also measured. At baseline, telemetric ECG ( a technique to record ECG by a wireless ambulatory central monitoring system from the implanted transmitters) recording showed no significant difference in HR between the Cav3.1/a1G TG mice, Cav3.1/a1G KO mice and control mice. ISO increased the HR in conscious mice to the same extent in both DTG and KO mice. However, when the central nervous system regulation is depressed (anesthetized) or removed (ex-vivo Langendorff perfusion), the percentage of HR increase after ISO application was significantly enhanced in the TG mice but reduced in the KO mice. At the cellular level, both at baseline and under all different ISO concentrations, Cav3.1/a1G KO SANCs had significantly slower firing rates than those of control SANCs. ISO induced smaller beating rate increase in Cav3.1/a1G KO than in C57BL/6 control mice. Cav3.1/a1G DTG SANCs have similar firing rates as those of control SANCs at baseline. At a low ISO concentration (10-9M), the beating rate increase induced by ISO in Cav3.1/a1G DTG SANCs is a little higher but not significant than that in FVB control SANCs. However, at higher ISO concentrations (10-8 and 10-7 M), ISO induced more increases in beating rate in Cav3.1/a1G DTG SANCs than in FVB control SANCs. In DTG mice, the enhanced increase of heart rate by ISO, a ß-adrenergic agonist, is due to the upregulation of the activity of Cav3.1/a1G. The upregulation of Cav3.1/a1G activity is through protein kinase A (PKA). Db-cAMP, a PKA activator, can greatly increase the T-type calcium current (ICa-T), and H89, a PKA inhibitor, blocks ISO effect on ICa-L and ICa-T in Cav3.1/a1G DTG ventricular myocytes, ISO also significantly increases Cav3.1/1G T-type Ca²+ currents in sinoatrial nodal cells. In telemetric ECG recordings, the data showed that inactivation of Cav3.1/a1G increases the incidence of AVB (atrioventricular block, impaired conduction or blocking of the impulse at the level of the atrioventricular junction, resulting in a lack of electrical and/or mechanical coordination between the atria and the ventricles) after ISO application compared to control mice. In addition, there are more PVB (premature ventricular beat, the heartbeat that is initiated by the heart ventricles rather than by the sinoatrial node) observed in Langendorff ECG in Cav3.1/a1G KO mice after ISO application. In conclusion, Cav3.1/a1G TTCC might play important roles in basal HR generation and in sympathetic/adrenergic regulation of HR, in which PKA could be an important mediator. Ablation of Cav3.1/a1G increases the susceptibility of arrhythmia after ISO application.