Local Party Organizations and the Mobilization of Latino Voters 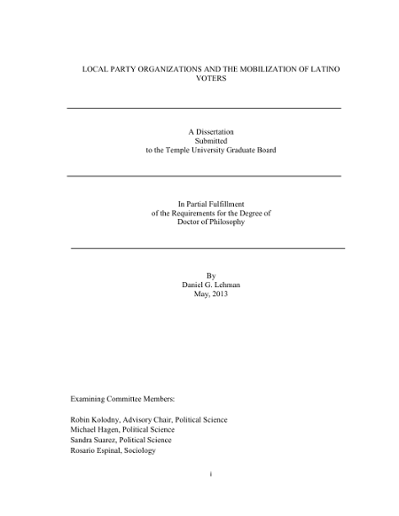 We frequently hear that Latinos are the fastest growing minority group in the United States. We also know that like many American immigrant groups, Latinos tend to reside in states where a critical mass of their community already is settled, in this case largely for geo-political reasons (e.g. New Mexico, Arizona, California, Texas, Florida and New York). Why, then, is Latino participation in national politics lower than white, Black, and Asian voters? And who has an interest in doing something about it? This project addresses several interrelated questions concerning the place of Latinos in American politics and the health of democracy in the United States. Political parties are meant to link citizens to the state. However, parties often fear that reaching out to certain groups may alienate the concerns of some core voters, providing a disincentive to political parties to prioritize Latino outreach. Here, I ask, to what degree are local political parties involved in mobilizing Latino voters as compared to other voting groups? Interest groups have much narrower constituencies than political parties by definition, but their purpose may not be exclusively, or even primarily, electoral. So, what role do interest groups and community organizations play in getting Latinos to vote? Perhaps parties and interest groups compliment each other's efforts to mobilize Latinos, so I ask, what relationship do political parties and interest groups develop in the push to mobilize Latino voters? I hypothesize that political parties increase efforts to mobilize Latino communities when these groups of voters are known to be reliable partisan voters and pivotal to winning elections at the local, state, and/or national level. Party organizations are unlikely to target Latino voters when they are few in number and make little difference in an election. Second, interest groups and organizations concerned with Latinos issues are going to be more consistent in mobilizing Latino voters whether or not they constitute a significant segment of the population and are pivotal to winning elections at the local, state, and/or national level. To answer these questions, I use several methods to gather data. Between November of 2008 and February 2009, I conducted a mail survey of 217 county political party chairs concerning Latino mobilization in the 2008 Presidential race. The survey was submitted to the chairs of every county political party in the ten states with the highest percentage of Latino population: Arizona, California, Nevada, Colorado, Florida, Illinois, New Jersey, New Mexico, New York, and Texas. Responses were then matched to county census and election data in order to understand the relationship between mobilization activity, county demographics, and partisan identity. What best predicts Latino mobilization? Using a multiple regression model, I found that Latino population size threshold and whether a county resides in a presidential swing state most strongly predict Latino mobilization. The greater the size of the Latino community within a county's population, the more likely political parties will seek to reach out to Latino voters. The data suggests that the likelihood that local parties made an attempt to mobilize Latino voters more than doubles when the county's Latino population moves above 25% of the total population. The impact of interest group activity by community organizations also seemed to spur greater party mobilization efforts towards Latinos. Likewise, national political dynamics have a trickle down impact on local Latino communities. County party organizations are more inclined to reach out to Latino voters in states where presidential elections are contested and where Latino votes could have an impact on close elections. Lastly, I conducted a qualitative case study to understand how this mobilization operates in practice. I explored strategies taken by several interest groups and community organization leaders in Nevada during the 2010 midterm elections to detail how those groups attempt to reach and mobilize Latinos, and the possible position political parties may fill in Latino communities where interest groups have become important politically in mobilizing voters, and vice versa. The case study reveals that Latino mobilization by parties and interest groups is part of a larger phenomenon in contemporary American elections in which voters are targeted by a partisan network of political actors that employ political parties, partisan interest groups, party and outside spending organization donors, and partisan volunteers. My work parallels and expands Mildred A. Schwartz's work (1990) on party networks and the complexity of relationships between political parties and interest groups to include how these political actors interact with Latino voters in the United States.