THE DISCOVERY OF NOVEL MACROLIDE ANTIBIOTICS THAT ADDRESS BACTERIAL RESISTANCE 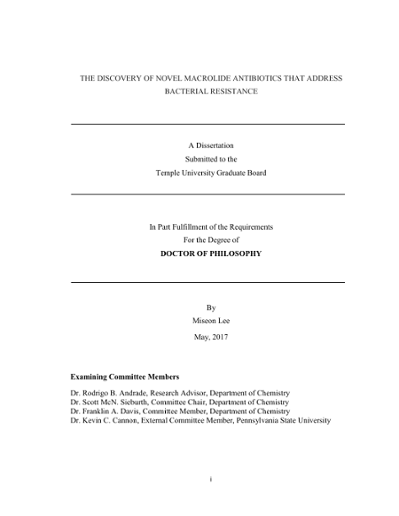 Bacterial resistance is a formidable 21st-century global public health threat. If left unaddressed, we risk moving toward a “post-antibiotic era.” While resistance is a natural consequence of antibiotic use, the rate at which pathogenic bacteria have evaded multiple classes of drugs has markedly outpaced the introduction of new ones. New antibiotics are desperately needed to fill this void. Macrolides are one of the safest and most effective drug classes in medicine; however, resistance has compromised efficacy. To date, three generations have been developed with only the lattermost targeting bacterial resistance. Single next-generation macrolides will not keep pace with the inevitable onset of resistance; thus, there is a critical need to greatly accelerate the procurement of multiple future-generation antibiotics to tackle both current and future resistance mechanisms. My research is to meet this need by designing, synthesizing, and evaluating a novel, future-generation macrolide antibiotics that will serve as an armamentarium to be individually deployed on demand. In the previous research in Andrade group, we synthesized and evaluated various desmethyl ketolide analogs. The fact that 4-desmethyl telithromycin was fourfold less potent than telithromycin against A2058G mutants indicated replacing the 4-Me with hydrogen (i.e., desmethylation) to avoid a steric clash with the 2-amino group of G2058 was insufficient in rescuing bioactivity. Guided by MD simulation, we concluded a logical, superior alternative strategy was the replacement of the 4-Me group with one possessing a smaller vdW radius and capable of establishing favorable interactions with both wild-type and A2058G mutant ribosomes. Specifically, we reasoned that 4-fluoro solithromycin would be ideal candidate. The hypothesis was that the 4-fluoro moiety would engage in dipole-dipole interactions (C-F---H) with the exocyclic 2-amino group of guanine, which is based on accumulated evidence that strategic placement of organofluorine can strongly impact potency, selectivity, and physicochemical properties. In addition, the axially disposed of 4-fluorine would provide conformational stabilization from a gauche effect with the vicinal O5 group. The novel synthetic routes to unexplored desosamine analogs at the C3’-amino substituent to the macrolide antibiotic would play a role in bioactivity and resistance. Hofmann reaction was employed to execute the same 2,3-epoxide ring opening method without removing desosamine and re-glycosylating. This markedly reduces the steps, time, and cost involved in preparing novel desosamine-modified analogs. Significantly, this route enables the first synthesis of N,N’-disubstituted desosamine analogs from an epoxide, which was utilized to prepare novel analogs of clarithromycin. The application of in situ click chemistry toward the discovery of novel macrolide antibiotics first required the synthesis of suitable azide and aryl alkyne reactants. Alkyne partners were procured by commercial vendors or chemical synthesis. We targeted two logical, validated positions to tether the side chains, specifically N11 on the macrolactone and N3’ of desosamine. The first (N11) has been the most utilized. Moreover, extensive structure-activity relationships have revealed a four-carbon tether is ideal. Based on the solithromycin−E.coli X-ray structure, I designed, synthesized, and evaluated dehydro solithromycin, which possesses an (E)-alkene in the side-chain. The use of an unsaturated side chain would conformationally preorganize the bi-aryl side chain in order to pay the entropic penalty and thus favorably contribute to the overall binding. An insightful observation made from MD simulationed ribosomes bound with to solithromycin revealed that the interaction of the side-chain includes H-binding as well as π-stacking. The hypothesis was that employing tethered side-chains bearing motifs that maximize H-bonding and π-stacking would be superior antibiotics for treating resistant bacterial strains bearing erm¬-mediated N6 methyl and dimethylated ribosomes. To test this hypothesis, we developed various analogs with different alkynes by introducing different functional groups at the 3 and 5 positions on the aromatic ring. Another desosamine sugar modification is bis-azide. To date, the use of a two side chain strategy has not been reported. To access the requisite bis-azides, we employed a tactic the oxidative demethylation and alkylation of desosamine to afford bis-click solithromycin analogs.