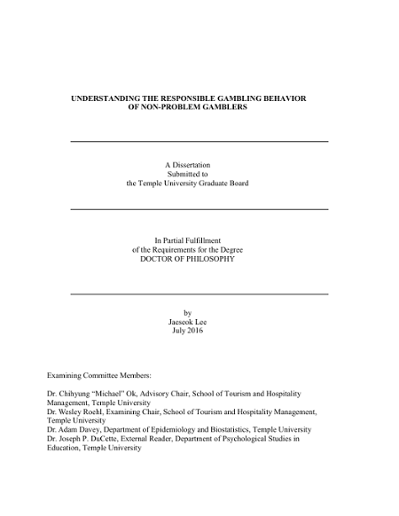 The purpose of this study was to better understand the goal-striving process in the context of non-problem gambler’s responsible gambling. More specifically, the primary aim of this study was to elucidate the hierarchical structure of goals, the role of the motivational phase of the goal-striving process, and the influence of cognitive evaluation and affective regulation on the goal-striving process. In the first part of the study, a conceptual model is proposed, in which the intrinsic factors used to predict non-problem gamblers’ intentions to gamble responsibly are delineated and tested according to the extension of the theory of planned behavior (Ajzen, 1985, 1991), the model of action phases (Gollwitzer, 1990, 1993), the model of goal-directed behavior (Perugini & Bagozzi, 2001; Perugini & Conner, 2000), and the model of effortful decision making and enactment (Bagozzi, Dholakia, & Basuroy, 2003; Dholakia, Bagozzi, & Gopinath, 2007). Four cognitive factors explain the motivational phase of the goal-striving process, and were incorporated in the current study. One factor explains the goal-oriented behavior at abstract level (i.e., goal feasibility), and the other three explain implementation of action-oriented behavior at concrete level (i.e., attitude toward implementing the actions necessary to achieve the goal, subjective norm, and perceived behavioral control). In addition, two ways of emotional regulation were incorporated to explain the goal-oriented behavior at abstract level. That is, prefactual emotional valence factors related to the success and failure of future goal attainment (anticipated positive and negative emotions) affect goal desire. To sum up, this study anticipated that the proposed antecedent constructs (two anticipated emotions, goal feasibility, attitude, subjective norm, and perceived behavioral control) were strong indicators of how non-problem casino patrons would strive to achieve the goal (i.e., maturing or developing responsible gambling behavior) through a goal-striving process, where the motivational phase plays a critical role in explaining intention to gamble responsibly. A secondary goal of the study was to explore how responsible gambling strategies implemented by the gambling industry influence non-problem casino customers’ goal-directed behavior in a responsible gambling setting. Given the ongoing controversy about the effectiveness of responsible gambling strategies, the focus in the second part of the current study was on how situational arousal factors (i.e., psychological reactance) with regard to external interventions (i.e., compulsory and supplementary responsible gambling strategies) would affect implementation intention, based on the psychological reactance theory (J. W. Brehm, 1989; S. S. Brehm & Brehm, 1981). In other words, situational arousal factors were incorporated herein to explain the extrinsic part of the goal-striving process model. This study was designed to facilitate an understanding of how and why external interventions may fail to deliver the intended effect in the responsible gambling context. In order to take into account the varying effectiveness of responsible gambling strategies, an effort was made to discern between the different effects of each responsible gambling strategy type and to understand in greater detail how these effects were moderated by individual disposition, and especially the strength of the individual’s desire for control. A clear understanding of the moderating effect enables a richer understanding of the effectiveness of responsible gambling strategies with regard to responsible gambling behavior by non-problem casino patrons. Insight gained from the study through analysis of the results is discussed, and important theoretical and practical implications and future research agendas presented in the conclusion.