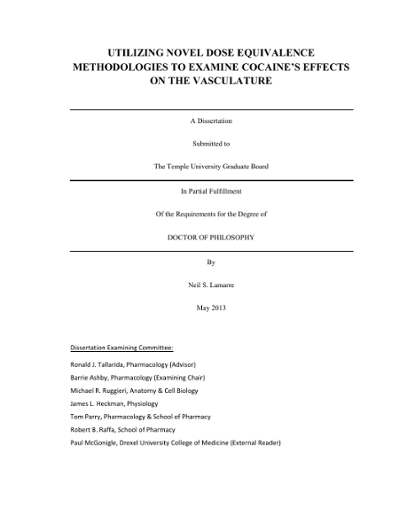 ABSTRACT: UTILIZING NOVEL DOSE EQUIVALENCE METHODOLOGIES TO EXAMINE COCAINE'S EFFECTS ON THE VASCULATURE Neil S. Lamarre Doctor of Philosophy Temple University School of Medicine, 2013 Doctoral Advisory Committee Chair: Ronald J. Tallarida, Ph.D. Cocaine abuse and addiction is a serious health problem, resulting in thousands of emergency room visits and deaths each year in the United States. It is particularly toxic to the cardiovascular system, including deleterious effects on the peripheral vasculature. These effects are not well understood, but evidence suggests chronic cocaine use may lead to endothelial dysfunction, thereby increasing relative risk of a number of other cardiovascular diseases including stroke, aneurysm, myocardial infarction, hypertension, etc. Data from our lab, and others, suggest that the presence of a functional endothelium has a dramatic effect on the contractility of the rat aorta that is agonist-specific. Attenuation of this endothelium-dependent vasodilatory component of agonist action is a primary feature of endothelial dysfunction. We have utilized dose equivalence theory to calculate the dose response relationship for the endothelium-dependent vasodilatory component of an agonist causing overt vasoconstriction. This component cannot be measured directly, but our novel methodology allows us to quantitate agonist-specific impairment of vasodilation, and describe it using the familiar parameters of the dose response curve. Another strength of this method, relative to currently used in vitro methods, is that it also avoids the confounding variable of a second agonist used to produce the initial vasoconstriction. To validate the methodology, a pilot study was performed examining the endothelial dysfunction in STZ-induced diabetic rats, as a positive control for endothelial dysfunction. Interestingly, this treatment showed impairment in the endothelium-dependent vasodilatory component of action of norepinephrine, but not of angiotensin-II. Thus, our initial hypothesis was confirmed - that disruption of the vasodilatory components of various agonists are independent, and that agonist-specific information may prove useful. Next, we employed our new methodology utilizing the rat aorta as our vascular model to test the hypothesis that chronic cocaine administration causes endothelial dysfunction. We first examined the endothelium-dependent vasodilation component of a number of physiologically important vasoconstrictors, and attempted to determine which vasodilatory mediators contributed to the effect. We found the endothelium to have a profound effect on the dose response curve to three important endogenous agonists. These data suggest that under conditions of endothelial dysfunction exaggerated vasoconstriction could occur, even within normal plasma concentration ranges of these vasoconstrictors, resulting in elevated blood pressure and further damage to the endothelium over time. No endothelial dysfunction was observed with this treatment paradigm, using our methodology or the standard approach. This may be a result of insufficient duration of cocaine treatment, or a result of our selection of the rat aorta as a model. We wanted to further investigate which vasodilatory mechanisms were involved in this vasodilatory component of action. We inhibiting various endothelium-derived mediators of this vasodilatory component of action (such as nitric oxide or prostacyclin), which revealed differential activation of these mediators by the agonists examined. For example, inhibition of nitric oxide synthesis abolished the endothelium-dependent vasodilatory component of endothelin-1, but only partially attenuated that of angiotensin-II. Thus, the agonist-specific pattern of impairment may also prove useful in examining the underlying mechanisms of impaired vasodilation. Endothelial dysfunction is one reported consequence of long term cocaine abuse; however, there are conflicting reports on the acute vascular effects of cocaine, with some reports concluding that cocaine is a vasoconstrictor, and some reporting its action as a vasodilator. There are in vitro reports of cocaine causing release of vasoconstrictors from the endothelium, which supports the longstanding notion of cocaine as a vasoconstrictor. However, one recent report demonstrates a dose-dependent vasodilatory effect of cocaine in rat aorta that is independent of the endothelium. This complexity is perhaps due, in part, to cocaine's affinity for a number of molecular targets, acting in combination. In examining the acute action of cocaine in our preparation, we observed an "inverted-U" shaped dose response, also referred to as a hormetic dose response curve. We then applied dose equivalence methodology in order to derive the "unknown" second component contributing the vasodilatory action of cocaine at higher doses. This methodology lets us calculate this unknown component, and describe it with the familiar parameters of a dose response curve, which could potentially aid in the identification of the unknown component. The preliminary studies with acute cocaine utilized a sub-maximal dose of phenylephrine in order to observe tension changes in either direction. This prompted us to further characterize the interaction of cocaine with other alpha adrenoceptor agonists. Importantly, because cocaine alone had no effect at doses up to 100 µM, but potentiated the vasoconstriction of alpha agonists, the interaction is therefore synergistic. This constitutes evidence of a previously undescribed mechanism contributing to cocaine's vasoconstricting effect. In vivo, reuptake inhibition is a major mechanism for cocaine-induced vasoconstriction, but is excluded in this experiment by virtue of low levels of sympathetic innervation in the rat aorta, and the use of methoxamine, an alpha agonist not subject to the reuptake mechanisms. This interaction may contribute to cocaine-induced vasoconstriction in the coronary arteries, especially in circumstances of endothelial dysfunction. In summary, the work presented in this dissertation applies new methodologies utilizing dose equivalence theory to the study of cocaine's effects on peripheral vasculature, and presents novel findings of synergy with respect to cocaine's enhancement on the action of alpha adrenoceptor-mediated vasoconstriction.