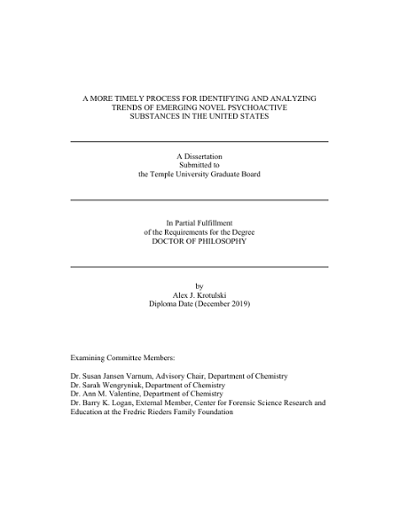 Novel psychoactive substances (NPS) are synthetic drugs that pose serious public health and safety concerns as their ingestion by recreational drug users continues to cause adverse events and death. A multitude of NPS have been implicated in forensic investigations in the United States, but the identification of these emerging substances is challenging and complex, requiring advanced analytical capabilities and novel analysis workflows. The most common and effective manner for identifying NPS is by the use of mass spectrometry, while the true utility of this technology lies within non-targeted acquisition techniques. This research sought to utilize novel drug screening technologies and customized methodologies to characterize current NPS use in high risk populations through the analysis of biological sample extracts discarded from a partnering forensic toxicology reference laboratory. Specifically, NPS detection, identification, and characterization were the primary foci to produce increased awareness and education on a national level. To accomplish these goals, two novel workflows were developed: sample mining and data mining. A liquid chromatography quadrupole time-of-flight mass spectrometry (LC-QTOF-MS) assay was developed, validated, and implemented for forensic toxicology analytical testing. A SCIEX TripleTOF™ 5600+ QTOF-MS with SWATH® acquisition coupled to a Shimadzu Nexera XR UHPLC was used. Resulting data were compared against an extensive in-house library database containing more than 800 analytes. The LC-QTOF-MS assay was applied to the re-analysis of biological sample extracts to discover emergent NPS, their metabolites, and trends in use patterns. In total, 3,543 biological sample extracts were analyzed during this research and 21 emerging NPS were detected, some for the first time, through sample mining. Among these emerging substances were the NPS opioids: isopropyl-U-47700, 3,4-methylenedioxy-U-47700, and fluorofuranylfentanyl; the NPS opioid precursors: N-methyl norfentanyl and benzylfuranylfentanyl; the NPS hallucinogens: 2F-deschloroketamine, methoxy-PCP, and hydroxy-PCP; the NPS stimulants: 3,4-methylenedioxy-alpha-PHP, eutylone, and N-ethyl hexedrone; and the NPS benzodiazepine: flualprazolam. With respect to trends, NPS opioid positivity declined over time during this research; however, fentanyl positivity was persistent. Heroin and 3,4-methylenedioxymethamphetamine (MDMA) positivity appeared to decline slightly, but further temporal evaluation is necessary. NPS were less likely to be found in combination with other NPS; only one NPS substance was found in 82.5% of NPS-positive samples. Fentanyl poly-drug use was common, including concurrent or proximate use with traditional opioids (42.8%), NPS opioids (27.3%), cocaine (26.4%), methamphetamine (13.1%), NPS stimulants (4.2%), and other substances. The evaluation of in vitro metabolism for five emerging NPS detected for the first time during this research (3,4-methylenedioxy-U-47700, ortho-fluorofuranylfentanyl, 2F-deschloroketamine, eutylone, and N-ethyl hexedrone) resulted in the characterization of major metabolic pathways and the identification of metabolites presence in vivo by data mining of extract datafiles. These major metabolites provide utility for forensic laboratories to prolong detection windows for NPS. The primary metabolite identified for 3,4-methylenedioxy-U-47700 was N-demethyl-3,4-methylenedioxy-U-47700; the primary metabolite identified for ortho-fluorofuranylfentanyl was fluoro-4-ANPP; the primary metabolite identified for 2F-deschloroketamine was 2F-deschloro-norketamine; and the primary metabolites identified for eutylone and N-ethyl hexedrone were products of hydrogenation to the beta-ketone. As shown through this research, NPS continue to appear in forensic toxicology casework and novel assays for their detection and characterization are critical to remaining at the forefront of emerging drug trends and recreational drug use. LC-QTOF-MS was a vital piece of the analytical puzzle for discovering and characterizing emerging NPS and their metabolites. Analytical chemists must continue research involving NPS to broaden our understanding of synthetic drugs and their public health and safety impacts.