Transcript Regulation within the Kcnq1 Domain 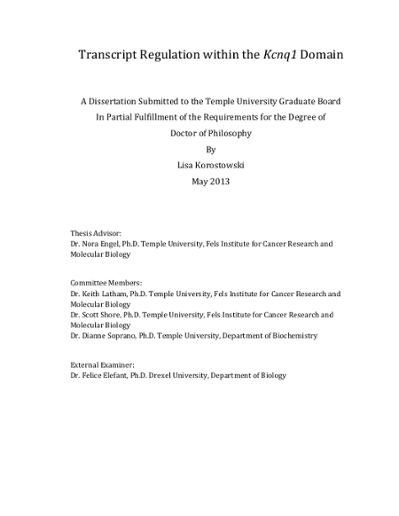 Epigenetics was a term first coined to understand how cells with the same genetic make up can differentiate into various cell types. Elegant research over the past 30 years has shown that these mechanisms include heritable marks such as DNA methylation and histone modifications along with stable expression of non- coding RNAs. Within the realm of epigenetics is a phenomenon known as genomic imprinting. Imprints are marks that distinguish the maternal from the paternal chromosomes in the form of methylation. Methylation marks can influence transcript expression, resulting in only one allele being expressed. One imprinted domain is the Kcnq1 domain located on chromosome 11p15.5 in humans and chromosome 7 in the mouse. This domain is thought to be under the control of a paternally expressed long noncoding RNA (ncRNA) Kcnq1ot1. The Kcnq1ot1 ncRNA is expressed on the paternal chromosome due to a differentially methylation region located within its promoter. The promoter is methylated on the maternal allele thus inhibiting ncRNA expression, whereas the promoter is unmethylated on the paternal allele. In the placenta, a most of the genes located within a one mega-basepair region are exclusively expressed from the maternal chromosome, whereas the transcripts on the paternal chromosome are silenced by the ncRNA. The placenta seems to follow the classic idea of an imprinted domain. However, in the embryo and more specifically, in the embryonic heart, this is not the case. In the embryonic heart, only a 400kb region is restricted to maternal expression. In addition, one the genes, Kcnq1, starts out expressed exclusively from the maternal allele in early development but switches to biallelic expression during mid-gestation. The purpose of my research is to determine the underlying complexities that are involved in the regulation of transcripts within the Kcnq1 domain. This involves the Kcnq1 gene itself, which has been shown to transition from mono- to biallelic expression during mid-gestation and the Kcnq1ot1 ncRNA per se. I hypothesize that regulation by the Kcnq1ot1 ncRNA is not occurring in a uniform manner in the embryo; rather, the amount of regulation by the ncRNA is dependent on the developmental stage and specific tissue. In addition, this regulation involves complex interactions between enhancers, insulators and other regulatory elements to control the amount of silencing by the Kcnq1ot1 ncRNA. First, through a series of experiments looking at the Kcnq1 promoter, the mechanism of Kcnq1 paternal expression was determined. It was confirmed that Kcnq1 becomes biallelic during mid-gestation in the heart. Bisulfite mutagenesis and methylation sensitive chromatin immunoprecipitation were used to test the hypothesis that the Kcnq1 promoter was methylated in early development and then lost its methylation mark. However, a lack of methylation disproved this mechanism of paternal Kcnq1 activation. Rather, chromosome conformation capture (3C) determined that the Kcnq1 promoter interacts in a tissue-specific manner with regions within the domain that have enhancer activity. The role of the ncRNA within our system was also investigated. Interestingly, when Kcnq1ot1 allelic expression was profiled throughout development in heart, it transitioned to biallelic expression during heart development but remained monoallelic in the liver and brain. Several possibilities could account for this phenomenon, including loss of promoter methylation and/or an alternative transcript start site. Both of these options were explored using bisulfite mutagenesis and 5' RACE. However, the Kcnq1ot1 promoter region retained its methylation mark even after the maternal transcript was turned on, disproving this idea. Rather, a maternal specific transcript was found in the heart to start downstream of the CpG islands. Lastly, to gain a better understand of the Kcnq1ot1 ncRNA, experiments were carried out on a mutant mouse in which a truncated form of the ncRNA was transmitted paternally; this is dubbed the "Kterm" mouse. Unexpectedly, Kcnq1 still followed the same mono- to biallelic transition as seen in the wild-type, whereas the head and body counterparts from the same stage embryos were biallelic for Kcnq1. Also, the immediate upstream genes, Cdk1nc and Slc22a18, lost their mono-allelic expression in neonatal heart, liver and brain when the Kterm mutation was transmitted. This suggested that Kcnq1ot1 did not function as a silencer for Kcnq1 paternal expression in the heart, but rather had an alternative and previously unknown function. From qRT-PCR, 3C and ChIP assays, it was determined that the Kcnq1ot1 ncRNA plays a role in regulating Kcnq1 gene expression in the heart by limiting its interaction to specific cis-acting enhancers. When the ncRNA was absent, the Kcnq1 promoter interacted with non-native sites along the domain, possibly causing the increase in transcript expression. This phenomenon was specific to the heart and was not seen in other tissues. These findings showed that Kcnq1 paternal expression is the result of strong developmental and tissue specific enhancers. Chromatin interactions in cis put a strong enhancer in contact with the Kcnq1 promoter to increase its expression in later development. In addition, a truncation mutation model identified a key role for the Kcnq1ot1 ncRNA in regulating Kcnq1 expression. Instead of regulating the imprinting status of Kcnq1, the ncRNA regulates the amount of Kcnq1 transcript being produced in the heart by regulating chromatin interactions. Finally, these studies identified a maternally expressed Kcnq1ot1 transcript whose role in heart development is still not fully understood. Taken together, these findings support a model where an inhibitory factor(s) silence the paternal Kcnq1 transcript and maternal Kcnq1ot1 transcript and in later development, this factor is released allowing for expression and chromatin interactions to occur.