THE ANTI-INFLAMMATORY EFFECTS OF DOCOSAHEXAENOIC ACID ON DENDRITIC CELLS 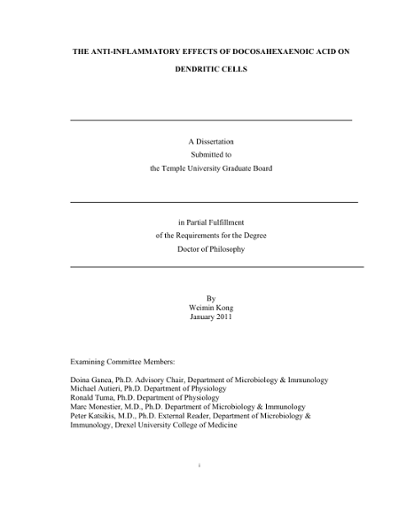 Dendritic cells (DC) are professional antigen presenting cells which link innate and adaptive immunity through recognition and processing of pathogens, migration to secondary lymph nodes, presentation of antigens to naïve T cells and contribution to T cell proliferation and differentiation into various classes of effector T cells. N-3 fatty acids including docosahexaenoic acid (DHA) and eicosapentaenoic acid (EPA) were reported to have protective anti-inflammatory effects in clinical studies and animal models of colitis, sepsis, and stroke. However, the mechanisms involved in the anti-inflammatory function of EPA and DHA are not elucidated. Recent studies, including our own, investigated the effect of n-3 fatty acids on dendritic cells, and reported that DHA reduced the capacity of human monocyte-derived DC (hMo-DC) and of murine bone marrow derived conventional DC (BMDC) to produce IL-12 and to stimulate CD4+ T cell proliferation. The objectives of this thesis were to provide a comprehensive analysis of the in vitro effects of DHA on conventional myeloid DC, including CD4+ T cell activation and differentiation, and on the in vivo effects of dietary DHA on splenic DC and in a model of experimental autoimmune encephalomyelitis (EAE). First, I report on the effects of DHA on the phenotype and function of BMDC in terms of endocytosis, chemokine receptor expression and migration, and cytokine production. Next, I investigated the effects of DHA-treated DC on CD4+ T cell proliferation and differentiation in response to specifc antigens. Finally, I assessed the effects of dietary DHA in response to in vivo LPS stimulation and in a model of neuroautoimmune disease, i.e. EAE. My studies show that pretreatment with DHA prevents LPS-induced DC maturation, resulting in the maintenance of an immature DC phenotype characterized by low expression of MHCII and costimulatory molecules (CD40, CD80, CD86), maintenance of high CCR5 expression and lack of CCR7 upregulation. DHA also maintained a high level of endocytosis in DC. From a functional point of view, these phenotypic traits result in retention of fully phagocytic DC at the inflammatory site, lack of migration towards the lymph node, and poor stimulatory capacity for T cells. Exposure to DHA inhibited the production of proinflammatory cytokines and chemokines such as IL-6, TNF&alpha, CCL-4, and IL-12p70. I also found that DHA prevents IL-12p70 production in DC activated by ligands for toll like receptors (TLRs) located either on the plasma membrane or intracellular. In addition, I show for the first time that DHA has a similar inhibitory effect on IL-23 and IL-27, two other members of the IL-12 family. The effects of DHA on cytokine production were shown to be mediated through activation of PPAR&gamma and inhibition of NF&kappaBp65 nuclear translocation, associated with reduction in I&kappaB degradation. Dietary DHA inhibited production of IL-12 family cytokines in vivo. Regarding the effects on CD4+ T cells, I found that DC treated with DHA (DC-DHA) had poor stimulatory capacity for CD4+ T cells in terms of proliferation. This was associated with an increase in p27(kip1), a cell cycle arresting agent. A higher percentage of T cells were arrested in G0/G1 in co-cultures with DC-DHA compared to DC controls. Although DC-DHA reduced T cell proliferation, effector T cells were not anergic and did not have suppressive function. T cells activated by DC-DHA also showed lower levels of IFN&gamma and IL-17 secretion. The percentage of IFN&gamma producing cells was also lower in T cells activated by DC-DHA, suggesting that the lower levels of IFN&gamma were due not only to reduced proliferation but also to the inhibition of Th1 differentiation. Accordingly, there was decreased expression of Tbet, GATA-3 and ROR&gammat, master transcription factors for Th1, Th2, and Th17 in T cells co-cultured with DC-DHA. In contrast, T cells co-cultured with DC-DHA expressed higher levels of TGF&beta which might be the reason for reduced proliferation since TGF&beta plays an important role in the induction of p27(kip1). Dietary DHA had a preventive effect in EAE lowering the EAE clinical score and resulting in less weight loss. The beneficial effect of dietary DHA in EAE was associated with reduced numbers of IFN&ganna- and IL-17-producing CD4+ T cells in both spleen and central nervous system (CNS). In conclusion, DHA maintains DC in an immature stage characterized by lower levels of MHCII and co-stimulatory molecules (CD40, CD80 and CD86), and poor stimulatory capacity for T cells. The DHA inhibition of pro-inflammatory cytokines (IL-12p70, IL-23, and IL-6) production in DC results in decreased Th1 and Th17 differentiation, cells that play an important role in autoimmune diseases. The protective effect of dietary DHA in EAE is associated with a reduction in Th1 and Th17 cell differentiation and CNS infiltration.