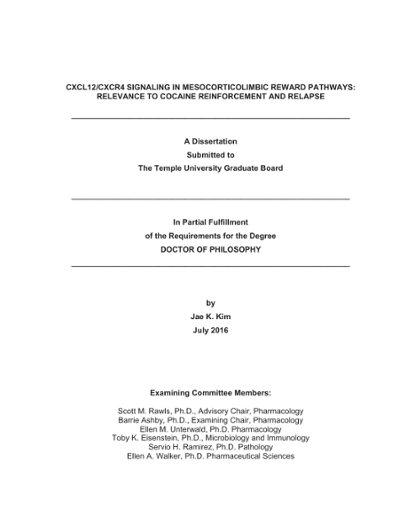 The role of chemokines as chemotactic cytokines and their functions in the immune system and related pathologies are well defined. Recently, strong evidence supporting the hypothesis that chemokines can act as modulators of neuronal activity and influence neurotransmission has been reported. The chemokine CXCL12 is constitutively expressed in adult brain and expression of CXCL12 and its cognate receptor CXCR4 have been reported in regions of rat brain that construct dopamine (DA) and glutamate (GLU) pathways such as ventral tegmental area (VTA), substantia nigra (SN), and nucleus accumbens (NAc). In the central nervous system (CNS), activation of CXCR4 on dopaminergic neurons and astrocytes initiate cascade of events that leads to DA and GLU release and influence synaptic transmission. In vivo, intracerebroventricular (ICV) CXCL12 has been shown to potentiate cocaine-induced locomotor activity. Based on these evidences, the studies, as outlined in this dissertation, aimed to expand understanding of how CXCL12/CXCR4 interaction can affect cocaine-induced behavior and reinforcement, with special focus on mechanisms involving GLU. We first evaluated involvement of CXCR4 activation by CXCL12 on cocaine-induced locomotor activity using a selective CXCR4 antagonist AMD3100. Results demonstrated that AMD3100 (5, 10 mg/kg, IP) pretreatment dose-dependently attenuated cocaine-induced locomotor activity without affecting the baseline activity. Thereafter, effects of AMD3100 on cocaine’s reinforcing efficacy were tested using a biased conditioned place preference (CPP) paradigm. In all CPP experiments, saline pretreated controls established a significant preference for the cocaine-paired context following four pairings with cocaine (10 mg/kg, IP). Rats pretreated with 2.5 and 5 mg/kg AMD3100 prior to each pairing session showed significantly lower preference for the cocaine-paired side, whereas rats pretreated with 1 mg/kg AMD3100 showed similar preference for the cocaine-paired side as the saline controls when tested in the absence of the drug. Rats pretreated with AMD3100 (5 mg/kg, IP) just once prior to testing showed significantly lower preference for the cocaine-paired side. These results demonstrate that CXCR4 antagonism reduces development and expression of cocaine-induced CPP. Intravenous cocaine self-administration (SA) was performed to examine the effects of AMD3100 on the acquisition of cocaine-taking behavior and reinstatement to cocaine-seeking. Acquisition of cocaine SA was studied using three doses of cocaine (0.375, 0.5, 0.75 mg/kg/infusion) on a fixed-ratio 1 (FR-1) schedule of reinforcement. Two doses of AMD3100 (5, 10 mg/kg, IP) were tested. In all SA experiments, saline pretreated controls readily acquired cocaine self-administration. The lower and higher AMD3100 decreased the number of reinforcers earned during the two hour sessions compared to saline controls when tested against acquisition of 0.375 and 0.5 mg/kg/infusion cocaine. However, when tested against the 0.75 mg/kg/infusion cocaine, only 10 mg/kg of AMD3100 resulted in reduction in responding, but not the lower dose. When a dose response curve was plotted using all doses of cocaine and AMD3100 tested, the effects of AMD3100 were represented by a significant downward shift of the dose response curve. Effects of AMD3100 on cocaine-seeking were evaluated using the reinstatement model, in which rats that were extinguished from self-administration of 0.5 mg/kg/infusion cocaine underwent reinstatement testing with cue or cue + drug presentation. A compound cue (light and tone stimulus), that was used during the acquisition training, and submaximal dose of cocaine (5mg/kg, IP) were used. In both reinstatement conditions, rats pretreated with saline reinstated following the presentation of cue or cue + drug prime. Rats pretreated with AMD3100, 30 minutes prior to reinstatement session, showed significantly lower number of lever presses indicating drug-seeking was not as robust compared to the saline pretreated controls. Following the observations that cocaine-induced behaviors may be partially mediated by CXCL12/CXCR4 interaction, neurochemical changes were examined to elucidate the underlying mechanisms. CXCR4 immunoreactivity in prefrontal cortex (PFC) following withdrawal from 7 days of repeated cocaine (15 mg/kg, IP) was evaluated. Although positive CXCR4 immunoreactivity was observed in PFC, there were no significant differences in the intensity of CXCR4 expression compared to the saline treated controls at acute (2 hours, 2 and 10 days) or protracted (30 days) withdrawal time points. In contrast, CXCL12 protein levels in PFC and NAc were negatively influenced after protracted withdrawal from 7 days of repeated cocaine (15 mg/kg, IP) administration. Following assessment of regional expression of CXCR4, cellular expression was evaluated using triple labeling immunohistochemistry which revealed the positive CXCR4-immunoreactivity on cells staining positively for vesicular glutamate transporter 1 (vGlut1) and glial fibrillary acidic protein (GFAP) showing that the glutamatergic neurons and astrocytes in the PFC express CXCR4. To assess the effects of CXCL12 on GLU transmission, microdialysis of NAc was performed. Following unilateral injection of 50 ng CXCL12 into the lateral ventricle, increase in extracellular GLU was observed. In a follow up study, AMD3100 pretreatment (10 mg/kg, IP) attenuated cocaine-induced increase in extracellular GLU in the NAc. Since the glutamate transporter subtype-1 (GLT-1) is a major regulator of extracellular GLU and upregulation of GLT-1 expression and function has been shown to attenuate reinstatement to cocaine-seeking, its expression was evaluated using immunoblot analysis of the NAc and PFC of rats that self-administered cocaine. The results revealed that AMD3100 (10 mg/k, IP; daily injection 30 min prior to SA session) pretreatment upregulated GLT-1 levels in the NAc but not PFC. In summary, results of the present study show that CXCL12/CXCR4 interaction may modulate cocaine-induced behavioral effects including reinforcement and reinstatement to cocaine-seeking. Neurochemical assessments revealed the presence of CXCR4-expressing glutamatergic neurons in the PFC and AMD3100-induced up-regulation of GLT-1. Most importantly, we provided direct evidence of CXCL12/CXCR4 mediated GLU transmission in NAc. Together, these results expand our understanding of chemokine’s role as neuromodulators and identify CXCR4 as a novel target for development of new pharmacotherapies for the treatment of cocaine addiction.