Putting the Community back into Therapeutic Community: Examining the Role of the Treatment Group in Prison-Based Substance Abuse Treatment 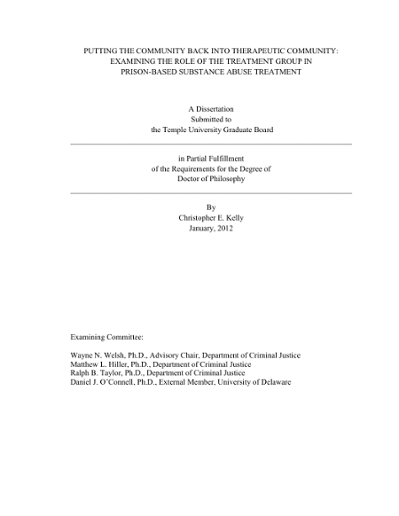 This dissertation conceptualized and evaluated the moderating effect of the treatment group on treatment responsiveness and recidivism among a sample of drug-involved offenders who received in-prison substance abuse treatment. Few studies of drug treatment simultaneously consider individual level variables and the context of group treatment. Those that have typically operationalize the treatment context with organizational indicators such as attributes of the staff, staff perceptions of the program, therapeutic orientation, and program accreditation. In contrast, the current work operationalized context from the perspective of the participant using as indicators client-based measures of treatment progress and satisfaction. The study expands existing theoretical models and extends what is known about treatment effectiveness by considering how the social group - the collection of individuals that constitute the prison unit in which the inmates received their 12 months of substance abuse treatment - may or may not moderate the influence of psychosocial functioning and treatment process variables and later outcomes. Such moderating impacts have theoretical implications for understanding the connections between treatment context, individual differences, and outcomes. Moderating impacts also have implications for the ways practitioners monitor treatment group climate and processes, thereby potentially improving service delivery. Finally, the present study contributes to the treatment literature by examining group influences of treatment on measures of recidivism - reincarceration and rearrest - that are of particular interest to practitioners and policymakers. The research was guided by three central questions: 1) Do significant differences on recidivism exist between treatment groups? 2) Does the treatment group moderate the impacts of psychosocial and treatment process variables on recidivism? 3) Does treatment modality have an effect on recidivism? To examine these questions, data from an evaluation of the treatment programs at the State Correctional Institution (SCI) at Chester, PA, were used (Welsh, 2006). The sample consisted of 618 adult male offenders who were randomly assigned to either the therapeutic community (TC) or the less-intensive group counseling treatment modality, each of which was 12 months in duration. A multilevel framework was applied to the data, as the offenders (level-1) were nested within 12 treatment units (level-2) in a single prison. The level-2 grouping was the prison unit where the offenders were housed and where they participated in the 12 months of treatment, and these units can be considered self-contained treatment programs. The predictors of primary importance were treatment responsiveness measures that were collected in the last month of the treatment experience. These included second-order factor analysis scores of measures of depression, anxiety, hostility, therapeutic engagement, trust in the treatment group, and peer support among others. Each was theoretically and empirically related to group functioning and later outcomes. Controls for other factors related to reoffending included time at risk, prior substance abuse and criminal history, age and race/ethnicity of the offender. These variables were all entered at level-1. A single level-2 variable was entered to examine and control for the effect of the type of treatment received (TC or group counseling). The data were analyzed using hierarchical generalized linear modeling (HGLM). This was the appropriate method because the data were nested and the outcomes were the binary measures of reincarceration and rearrest. Notably, multilevel models revealed significant variation on the reincarceration outcome across treatment units (level-2), controlling for treatment modality. This supported the first hypothesis that treatment effects could be attributed to something other than individual level variables or type of treatment received. A similar significant finding across treatment units (level-2), however, was not detected for the rearrest variable. Further, this method allowed for the examination of treatment group impacts on the individual psychosocial functioning and treatment process measures controlling for the type of treatment received. The second hypothesis stated that the treatment group would differentially affect the impact of these variables on recidivism. To reduce the number of individual-level predictors, the various subscales were entered into a second order principal components factor analysis. Three factors emerged: negative affect, positive attitude, and treatment satisfaction. Controlling for the composition of the group, the negative affect factor had a significant, positive direct effect on reincarceration. When the slopes of the three factors were allowed to vary, the model with treatment satisfaction and positive attitude as random effects fit the model best, as the treatment group significantly affected the impact these variables had on reincarceration. With regard to the third research question, in no analyses conducted did the treatment modality have a significant effect on the outcome. The third hypothesis that stated TC participants would have lower rates of reincarceration and rearrest, therefore, was not supported. This was a surprising result, as TCs have been found to be effective at reducing recidivism in previous research. In none of the existing studies, however, did the comparison group receive professional treatment services as the group counseling participants at SCI-Chester received. Several findings have implications for treatment research and policy. First, reincarceration significantly varied across the treatment units, even when controlling for the treatment modality and time at risk in the community. Second, the analysis of level-2 group impacts on individual level variables and recidivism were new contributions to the research in this area. These findings have implications for both theory (macro-to-micro theoretical effects of substance abuse treatment) and treatment delivery to those in prison. This research supported the first and second hypotheses that the group-level dimensions of prison-based substance abuse treatment have not been adequately considered in prior studies. This study takes an important first step in the direction of a more complete view of treatment experiences and outcomes that considers individuals nested within treatment groups.