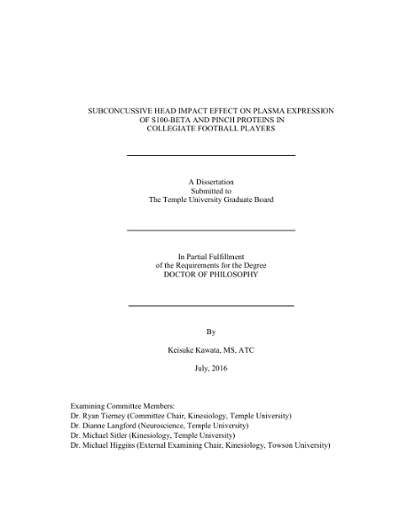 In this prospective longitudinal investigation of Division-I collegiate football players, the acute and longer-term effects of repetitive subconcussive impacts on plasma S100β and PINCH levels and concussion-related symptom score were examined. The first aim was to investigate the acute repetitive subconcussive impact effect by comparing the biomarker levels at pre and post full-gear practice, followed by examining the relationship of head impact magnitude and frequency of on acute increases in S100β and PINCH levels and symptom score. Hypotheses for the first aim were that there would be acute increases in plasma S100β and PINCH levels, but no change would be observed in symptom score. A significant relationship between subconcussive impact kinematics and acute changes in outcome measurements would be observed only in S100β. The second aim was to examine the longer-term effect of subconcussive effects on plasma S100β and PINCH levels as well as symptom score compared to the pre-season baseline. It was hypothesized that the players who sustained high frequency and magnitude of subconcussive impact would induce chronically high levels of plasma PINCH compared to the baseline. However, chronic effect would not be found in plasma S100β and symptom score. Independent variables were time (pre vs. post-practice), days (baseline, 1st Pads-OFF, 1st Pads-ON, 2nd Pads-ON, 3rd Pads-ON, 4th Pads-ON, and post-season), and group (higher vs. lower impact group). Dependent variables were the plasma expression of S100β and PINCH and symptom scores at each time point, pre-post differences in the plasma expression of S100β and PINCH and symptom scores, and head impact kinematics (frequency, sum of peak linear and rotational acceleration). This prospective observational study of 22 Division-I collegiate football players included pre-season baseline, pre-season practices [1 helmet-only and 4 full-gear], and post-season follow-up. Acute subconcussive effects were examined using the data from the first full-gear practice. Cumulative subconcussive effects were examined across the study duration (total 12 time points per player). Blood samples and self-reported symptom scores were obtained and blood biomarkers were assessed for pre-post practices and pre-post season. Plasma S100β expression level was assessed using a sandwich-based enzyme-linked immunosorbent assay. Plasma PINCH expression level was assessed using western blot analysis. An accelerometer-embedded mouth guard was employed to measure impact kinematics including number of impacts (hits), peak linear acceleration (PLA), and peak rotational acceleration (PRA). For examining cumulative effects, based on the previously established cut-off value of 173.5 g, players who were exposed average impact magnitudes below 173.5 g per practice were categorized into lower (n = 8) or greater than 173.5 g were categorized into higher (n = 14) impact groups. Data analysis consisted of descriptive and inferential statistics. Student’s t-tests were used to assess group differences in demographic and head impact kinematic data, acute effects using pre-post practice change in concussion-related symptom scores and biomarker levels, and longer-term effects using pre-post season change in concussion-related symptom scores and biomarker levels. Pearson r correlations were used to examine potential relationship between acute increase in outcome measures and head impact kinematics data. Two-way repeated measures ANOVAs were used to identify cumulative subconcussive effects over time in concussion-related symptoms scores and biomarker levels. If necessary, one-way ANOVA as a function of group was used to identify where cumulative effect began compared to the baseline, using Dunnett’s host-hoc correction. The alpha level was set at p &lt; 0.05. A total of 721 head impacts were recorded from the 22 players during the 5 training camp practices. There were significant differences in head impact kinematics per practice between lower and higher impact groups [number of impacts per practice, 1.3 vs. 10.0 (p &lt; .001); linear acceleration, 36.4 vs. 285.6 g (p &lt; .001); rotational acceleration, 2,048.4 vs. 16,497.31 rad/s2 (p &lt; .001), respectively]. There were no changes in self-reported concussion symptoms across the study duration. While there was no change in longer-term effect between pre-season baseline and post-season follow-up in plasma S100β level, robust and acute increase was observed in post-full gear practice (0.111 + 0.01 ng/ml) compared to pre-practice S100β level, (0.048 + 0.01 ng/ml; p &lt; .0001). The acute increase in plasma S100β was significantly and positively correlated to the number of hits (r = 0.636, p = 0.001), sum of peak linear acceleration (r = 0.570, p = .006), and sum of peak rotational acceleration (r = 0.655, p = 0.001) sustained. For plasma PINCH level, there was a 4-fold increase at post-practice compared to that of pre-practice (p = .037), indicating the acute effect of subconcussive impacts. However, the acute increase in plasma PINCH level was independent from frequency and magnitude of impacts sustained, demonstrated by no statistically significant correlations with the number of hits (r = 0.222, p = .333), sum of peak linear acceleration (r = 0.289, p = .204), and sum of peak rotational acceleration (r = 0.297, p = .191). When players were categorized into the lower and higher impact groups and assessed across the 5 training-camp practices, consistently higher levels of plasma S100β and PINCH were found only in the higher impact group at post-practice compared to the baseline. However, plasma level of S100β and PINCH at pre-practice remained stable from the baseline, suggesting the absence of chronic effect from repetitive head impacts. When season-long effects on plasma S100β and PINCH levels were examined, 10 out of 16 players showed increase in plasma PINCH level at post-season compared to the baseline (p = .039) while no significant difference in plasma S100β level. Results from the current study suggest that subconcussive head impacts do not exert self-claimed concussion-related symptoms; however, blood biomarkers detected noticeable acute changes following repetitive subconcussive impacts. Plasma level of S100β protein can be a potential diagnostic measurement to track acute brain burden, and plasma level of PINCH protein may be reflective of the longer-term cumulative brain damage from repetitive head impacts.