Predicting the Estrogenic and Androgenic Activity of Environmental Waters: A Quantitative Study on Mixture Interactions 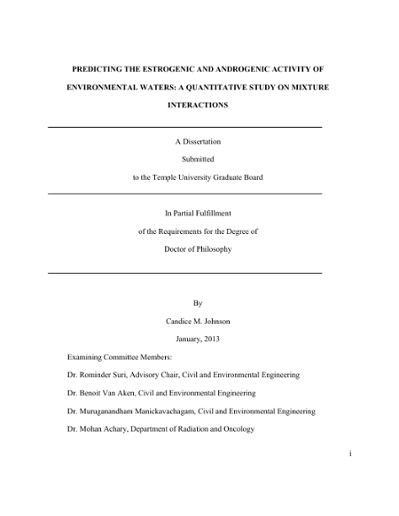 Steroid hormones confer biological activity to effluents of wastewater treatment plants (WWTPs). The occurrence of estrogen and androgen hormones in addition to their biological effects in the environment have been widely studied and there is a growing consensus that mixtures of steroid hormones; albeit at low ng L-1concentrations, lead to endocrine disruption in some aquatic organisms. These mixtures may also be influenced by the contributions of synthetic estrogens and androgens, which may display either additive or antagonistic activity. In order to measure the ability of a single compound, or complex mixture to influence the function of estrogenic or androgenic signaling pathways bioassays are used. Most commonly, these tests are in vitro and may quantify the ability of a compound to bind and/or (in) activate the steroid receptors. Two commonly used bioassays for estrogenicity detection are the Yeast Estrogen Screen (YES) and the E-Screen assay. The Yeast Androgen Screen (YAS) is commonly used to measure androgenic activity. The yeast (Saccharomyces cerevisiae) are genetically transformed and express either the human Estrogen Receptor (ER) or Androgen Receptor (AR), and contain Estrogen or Androgen Responsive Elements (ERE/ARE) and Lac Z reporting plasmids. Once the receptors become activated, beta-Galactosidase is secreted into the assay medium and the level of beta-Galactosidase secretion relates to the estrogenicity or androgenicity of the sample tested. Due to its simplicity and the moderately fast assay time, the YES and YAS are commonly used assays in the analysis of complex mixtures to identify the major contributors to both estrogenic and (anti)-androgenic activity in environmental water. The effect directed approach combines both chemical methods and bioassays in a chemical fractionation scheme that is directed by the bioassays. In order to confirm the identity of the key contributors, it is important to compare the biological activities that are calculated from the concentrations of the identified hormones (given their individual biological responses) and the total biological activity measured through the use of bioassays, Equation 1. RPsCs+ RP2C2+ ...+RPnCn = IEQ (1) where Cn is the concentration of the nth mixture constituent, RP is the relative (estrogenic or androgenic) potential of the nth mixture constituent as determined in the bioassay, and IEQ is the estimated total induction equivalent concentration of the mixture by chemical methods. Cs and RPs represents the concentration and relative potential of a standard compound respectively. Agreement between the chemically and biologically derived IEQs means that the major contributors to the biological effect have been successfully identified. However, the biological assays measure the contribution of additive, antagonistic and synergistic activity in the mixture; therefore, the biologically derived IEQs represent the net biological activity. Chemical methods are unable to predict these interactions and as such the result of the concentration addition (CA) approach (Equation 1) is often inconclusive and suggestive of interacting components. An interaction model that can estimate the net biological activity of a mixture from the concentrations of individual mixture constituents (chemical methods) is thus necessary. An interaction model that combines both the relative potential (RP) as well as the interaction index (γ) in a parameter called aRP was developed. The aRP is defined by Equation 2 and is used similarly to the CA approach, Equation 3. aRP = interaction index-1RP (2) aRPsCs+ aRP2C2+ ...+aRPnCn = IEQ (3) The aRP can be calculated for any nth mixture constituent by measuring the degree to which the mixture components altered the activity of the standard and assessing those changes as a function of mixture ratios. The interaction method was validated using a mixture of testosterone, with two anti- androgens, di-n-butyl phthalate, and bisphenol A in the YAS. Mixtures of 17ß;-estradiol, estriol, 17α-dihydroequilin and di-n-butyl phthalate were evaluated in the YES assay. Using Equation 3 the net estrogenic and androgenic activity of the mixtures was estimated. There was a significant improvement over the CA based approach in Equation 1. Overall, in 24 out of 32 mixtures tested there was no significant difference between the aRP and observed responses. Large percent errors were observed in the CA model, particularly when the proportion of antagonists was high as the CA model tended to over-predict the responses. On the contrary, only two aRP model predictions exceeded 50% error. Risk assessors should use the CA model with caution as it could over-predict biological responses and an alternative approach such as the aRP model could be used. In this regard, a database of aRP values for identified antagonistic/synergistic compounds could be assembled and estimations of biological activity could be made using these aRP values. The aRP interaction model could also be used to provide fundamental understanding to the behavior of the constituents in a complex mixture. Although the interaction model presented may account for possible deviations from additivity in environmental mixtures, predictions of mixture effects may be complicated by matrix interferences. In this regard, a sensitive bioassay; such as the E-Screen, which is capable of detecting concentrations as low as 0.27 ng L-1 of 17β-estradiol equivalents is beneficial. However, one major drawback to the E-Screen assay is the 6-day analysis time. In order to maintain the sensitivity of the assay and reduce the analysis time, Fourier Transform Infra-red Imaging Spectroscopy (FT-IRIS) was used to probe the bio-molecular level events that occur in single cells prior to a detectable response in cellular proliferation. The investigation revealed that changes occur on the sub-cellular level at 48-hours after incubation which are comparable to the 6 day E-Screen responses (Pearson R = 0.978). The FT-IRIS response appears to be due to the increase in mucins which are known to play a role in cellular signaling and proliferation. The EC50 values for the E-screen and FT-IRIS assay were 2.29 and 2.56 ppt respectively, indicating that the molecular changes, which are observed at the single cell level using FT-IRIS, are reflective of physiological changes that are observed as the cell population responds to 17ß-estradiol. The study indicates that sophisticated imaging and microscopy techniques such as FT-IRIS may play a role in environmental bio-analytical methods.