Binge Angst: An Investigation of Affective Distress the Day after Binge Drinking 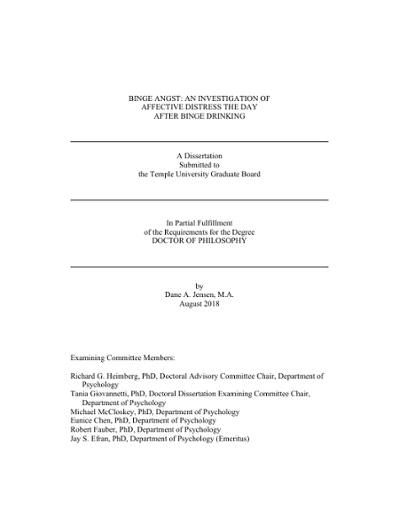 The well-documented relationship between alcohol use and affective distress can be destructive, in many cases leading to negative physiological, social, and legal consequences. Binge drinking, defined as a pattern of drinking that brings blood alcohol concentration levels to 0.08 g/dL, typically reached after drinking more than 4 (for women) or 5 (for men) standard drinks in under two hours, is an increasingly popular activity, particularly among young people, and rates of binge drinking spike around the same time lifelong patterns of alcohol abuse are being established. Given the prominence of negative affect and associated constructs (i.e., repetitive negative thought, intolerance of uncertainty, anxiety sensitivity, self-efficacy) in models of alcohol use, anxiety, and mood disorders, the present study examines the predictors and consequences of negative affect and associated constructs the day after binge drinking. Our primary aims were: (a) to determine the prevalence of negative affect the day after binge drinking in a large, undergraduate sample, and (b) to examine differences in negative affect, post-event processing, and negative perceived self-efficacy between individuals on days following binge drinking as compared to days following abstinence and to assess whether neuroticism moderated these differences. Secondary aims included examining predictors of situational avoidance, changes in alcohol use and negative affect, and psychological factors associated with neuroticism and increases in negative affect (i.e., alcohol-induced memory losses and intolerance of uncertainty, physical hangover symptoms and anxiety sensitivity). We hypothesized that types of negative affect (e.g., anxiety, depression, guilt) would be reported by 5% to 25% of the sample and that individuals in the binge group would report higher levels of state negative affect, post- event processing, and negative perceived self-efficacy in academic, social, and coping domains than individuals in the abstinence group. Further, we predicted that higher levels of neuroticism would be associated with higher levels of the outcome variables. Neuroticism was expected to moderate the main effect of group such that neuroticism would have a greater effect in the binge group than in the abstinence group. To these ends, the study was conducted in two parts: first, prevalence of negative affect the day after binge drinking was assessed in a large, undergraduate sample (N = 808). Then, a subsample (n = 139) was recruited to participate in a longitudinal, quasi- experimental examination in which participants were assessed at three time points: baseline, the day following either a night of binge drinking or a night of abstinence, and two weeks following their second assessment. In line with hypotheses, types of negative affect ranged in prevlance from 22.8% of the sample (Apathy) to 1.0% of the sample (Suicidal thoughts). In addition, negative affect, post-event processing, and negative perceived self-efficacy in academic, social, and coping domains were higher on days following binge drinking compared to days following abstinence. Of note, neuroticism did not moderate any of these relationships. Additional results and implications are discussed.