Pharmacological and Neuroanatomical Analysis of GNTI-Induced Repetitive Behavior in Mice 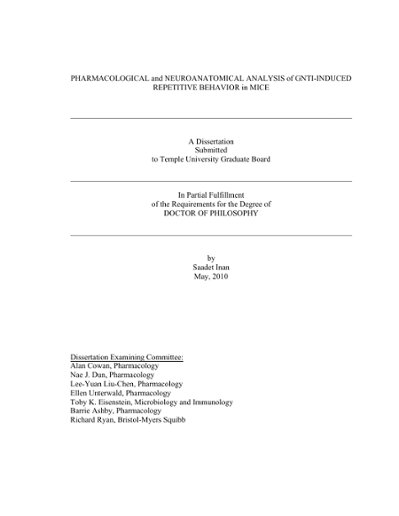 This thesis is comprised of two parts. In the first part, we investigated a) the pharmacology of GNTI, a selective kappa opioid receptor antagonist, as a scratch-inducing compound in mice and b) possible mediators and receptors that may be involved in GNTI-induced scratching (itch). We studied if GNTI induces scratching through opioid, histamine, gastrin-releasing peptide (GRP) and/or muscarinic M1 receptors. In the second part, we established similarities and differences between pain and itch using GNTI-induced scratching and formalin-induced nociception models in mice. We found that GNTI (0.03-3 mg/kg, s.c., behind the neck) induces compulsive and vigorous scratching behavior in a dose-dependent manner. A standard submaximal dose (0.3 mg/kg) of GNTI caused animals to scratch 500-600 times in a 30 min observation period. Intrathecal (i.t.) or intraperitoneal (i.p.) administration of GNTI did not elicit scratching behavior. Duration of action of GNTI was 60-70 min and tolerance to the repetitive behavior did not develop. C-fos expressing neurons, in response to GNTI injection, were localized on the lateral side of the superficial layers of the dorsal horn of the cervical spinal cord. Compound 48/80, a chemically different pruritogen, evoked c-fos expression in neurons which are located on the lateral side of the superficial layer of the dorsal horn. These data suggest that both GNTI and compound 48/80 activate a group of sensory neurons located on the lateral side of lamina I and II. Pretreating (at -20 min) and posttreating (at +5 min) mice with the kappa opioid receptor agonist, nalfurafine (0.001-0.03 mg/kg, s.c.), significantly attenuated scratching induced by GNTI (0.3 mg/kg). These effects were not a consequence of behavioral depression. Tolerance did not develop to the anti-scratch activity of nalfurafine. Pretreating mice with nalfurafine (0.02 mg/kg) prevented both GNTI- and compound 48/80-provoked c-fos expression. Our c-fos results suggest that the preclinical antipruritic activity of nalfurafine occurs at the spinal level. Moreover, our results reinforce the need to evaluate nalfurafine as a potentially useful antipruritic in human conditions involving itch. GNTI still elicited excessive scratching in mice lacking mu, delta or kappa opioid receptors, respectively, as well as in mice pretreated with either naloxone or norbinaltorphimine. The H1 receptor antagonist, fexofenadine, or the H4 receptor antagonist, JNJ 10191584, did not attenuate GNTI-induced scratching. Also, pretreating mice with the peptide GRPR antagonist, [D-Phe6]bombesin(6-13) methyl ester, or the non-peptide GRPR antagonist, RC-3095, did not antagonize scratching induced by GNTI. Furthermore, GRPR mRNA levels did not change in response to GNTI injection. Telenzepine, a standard M1 receptor antagonist, had no marked effect against GNTI-elicited scratching, however (unexpectedly) McN-A-343, an M1 receptor agonist, attenuated this behavior in a dose-dependent manner. In the second part of our studies, we found that pretreating mice with lidocaine (i.d., behind the neck) inhibits GNTI-induced scratching and prevents GNTI-provoked c-fos expression in the dorsal horn of the spinal cord. Similarly, lidocaine (i.d., hind leg) inhibits formalin-induced nociception as well as formalin-provoked c-fos expression. While injection (s.c.) of formalin to the face of mice induced only wiping (indicating pain) by forepaws of the injection side, injection (s.c.) of GNTI to the face elicited grooming and scratching (indicating itch). In contrast to formalin, GNTI did not induce c-fos expression in the trigeminal nucleus suggesting that pain and itch sensations are projected differently along the sensory trigeminal pathway. In short, our main results indicate that a) the scratch-inducing activity of GNTI is not mediated by opioid, histamine or GRP receptors; b) kappa opioid receptors are involved, at least in part, in the inhibition of itch sensation and thus, on the basis of our results, nalfurafine holds promise as a potentially useful antipruritic in human conditions involving itch; and c) agonism at M1 receptors inhibits GNTI-induced scratching therefore the M1 receptor may be a key target for antipruritic drug development.