Effects of Charge-Transfer Excitons on the Photophysics of Organic Semiconductors 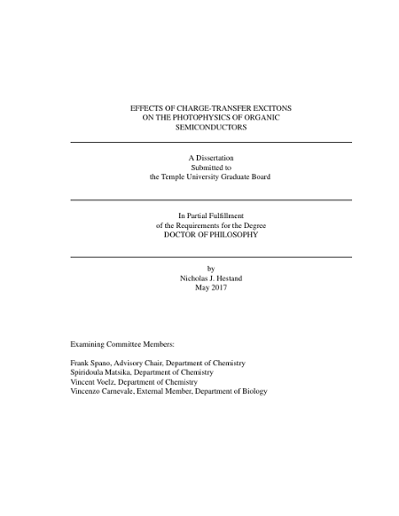 The field of organic electronics has received considerable attention over the past several years due to the promise of novel electronic materials that are cheap, flexible and light weight. While some devices based on organic materials have already emerged on the market (e.g. organic light emitting diodes), a deeper understanding of the excited states within the condensed phase is necessary both to improve current commercial products and to develop new materials for applications that are currently in the commercial pipeline (e.g. organic photovoltaics, wearable displays, and field effect transistors). To this end, a model for pi-conjugated molecular aggregates and crystals is developed and analyzed. The model considers two types of electronic excitations, namely Frenkel and charge-transfer excitons, both of which play a prominent role in determining the nature of the excited states within tightly-packed organic systems. The former consist of an electron-hole pair bound to the same molecule while in the later the electron and hole are located on different molecules. The model also considers the important nuclear reorganization that occurs when the system switches between electronic states. This is achieved using a Holstein-style Hamiltonian that includes linear vibronic coupling of the electronic states to the nuclear motion associated with the high frequency vinyl-stretching and ring-breathing modes. Analysis of the model reveals spectroscopic signatures of charge-transfer mediated J- and H-aggregation in systems where the photophysical properties are determined primarily by charge-transfer interactions. Importantly, such signatures are found to be sensitive to the relative phase of the intermolecular electron and hole transfer integrals, and the relative energy of the Frenkel and charge-transfer states. When the charge-transfer integrals are in phase and the energy of the charge-transfer state is higher than the Frenkel state, the system exhibits J-aggregate characteristics including a positive band curvature, a red shifted main absorption peak, and an increase in the ratio of the first two vibronic peaks relative to the monomer. On the other hand, when the charge-transfer integrals are out of phase and the energy of the charge-transfer state is higher than the Frenkel state, the system exhibits H-aggregate characteristics including a negative band curvature, a blue shifted main absorption peak, and a decrease in the ratio of the first two vibronic peaks relative to the monomer. Notably, these signatures are consistent with those exhibited by Coulombically coupled J- and H-aggregates. Additional signatures of charge-transfer J- and H-aggregation are also discovered, the most notable of which is the appearance of a second absorption band when the charge-transfer integrals are in phase and the charge-transfer and Frenkel excitons are near resonance. In such instances, the peak-to-peak spacing is found to be proportional to the sum of the electron and hole transfer integrals. Further analysis of the charge-transfer interactions within the context of an effective Frenkel exciton coupling reveals that the charge-transfer interactions interfere directly with the intermolecular Coulombic coupling. The interference can be either constructive or destructive resulting in either enhanced or suppressed J- or H- aggregate behavior relative to what is expected based on Coulombic coupling alone. Such interferences result in four new aggregate types, namely HH-, HJ-, JH-, and JJ-aggregates, where the first letter indicates the nature of the Coulombic coupling and the second indicates the nature of the charge-transfer coupling. Vibronic signatures of such aggregates are developed and provide a means by which to rapidly screen materials for certain electronic characteristics. Notably, a large total (Coulombic plus charge-transfer) exciton coupling is associated with an absorption spectrum in which the ratio of the first two vibronic peaks deviates significantly from that of the unaggregated monomer. Hence, strongly coupled, high exciton mobility aggregates can be readily distinguished from low mobility aggregates by the ratio of their first two vibronic peaks. Analysis of the spatial dependence of the intermolecular interactions reveals that all four aggregate types (HH-, HJ-, JH-, JJ-) can be achieved by enforcing the appropriate crystalline packing arrangement. Such tunability is possible due of the different length scales over which the natures of the two coupling sources interconvert from J-like to H-like; whereas the nature of the Coulombic coupling is known to be sensitive to displacements on the order of half the molecular length, the nature of the charge-transfer mediated exciton coupling is sensitive to geometric displacements of approximately a carbon-carbon bond length. It is proposed that such sensitivity should allow for fine tuning of the total excitonic coupling via modifications in the packing structure, as determined, for example, by the side chains. Several examples of the different aggregate types are provided throughout this dissertation as the model is used to probe the excited state character of several relevant conjugated organic systems. Such examples include pentacene and 7,8,15,16-tetraazaterrylene (TAT) along with several derivatives from the perylene family.