This Woman's Work: The Sociopolitical Activism of Bebe Moore Campbell 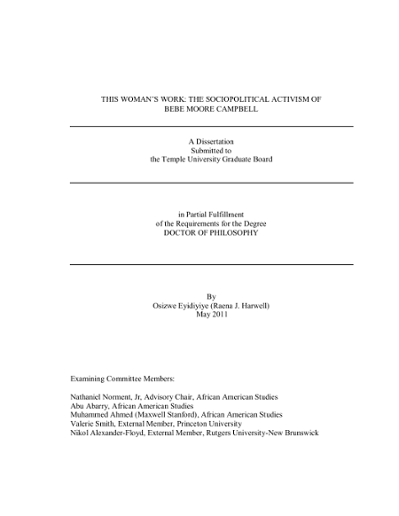 In November 2006, award-winning novelist, Bebe Moore Campbell died at the age of 56 after a short battle with brain cancer. Although the author was widely-known and acclaimed for her first novel, Your Blues Ain't Like Mine (1992) there had been no serious study of her life, nor her literary and activist work. This dissertation examines Campbell's activism in two periods: as a student at the University of Pittsburgh during the 1960s Black Student Movement, and later as a mental health advocate near the end of her life in 2006. It also analyzes Campbell's first and final novels, Your Blues Ain't Like Mine and 72 Hour Hold (2005) and the direct relationship between her novels and her activist work. Oral history interview, primary source document analysis, and textual analysis of the two novels, were employed to examine and reconstruct Campbell's activist activities, approaches, intentions and impact in both her work as a student activist at the University of Pittsburgh and her work as a mental health advocate and spokesperson for the National Alliance for Mental Illness. A key idea considered is the impact of her early activism and consciousness on her later activism, writing, and advocacy. I describe the subject's activism within the Black Action Society from 1967-1971 and her negotiation of the black nationalist ideologies espoused during the 1960s. Campbell's first novel Your Blues Ain't Like Mine and is correlated to her emerging political consciousness (specific to race and gender) and the concern for racial violence during the Black Liberation period. The examination of recurrent themes in Your Blues reveals a direct relationship to Campbell's activism at the University of Pittsburgh. I also document Campbell's later involvement in the National Alliance on Mental Illness (NAMI), her role as a national spokesperson, and the local activism that sparked the birth of the NAMI Urban-Los Angeles chapter, serving black and Latino communities (1999-2006). Campbell's final novel, 72 Hour Hold, is examined closely for its socio-political commentary and emphasis on mental health disparities, coping with mental illness, and advocacy in black communities. Campbell utilized recurring signature themes within each novel to theorize and connect popular audiences with African American historical memory and current sociopolitical issues. Drawing from social movement theories, I contend that Campbell's activism, writing, and intellectual development reflect the process of frame alignment. That is, through writing and other activist practices she effectively amplifies, extends, and transforms sociopolitical concerns specific to African American communities, effectively engaging a broad range of readers and constituents. By elucidating Campbell's formal and informal leadership roles within two social movement organizations and her deliberate use of writing as an activist tool, I conclude that in both activist periods Campbell's effective use of resources, personal charisma, and mobilizing strategies aided in grassroots/local and institutional change. This biographical and critical study of the sociopolitical activism of Bebe Moore Campbell establishes the necessity for scholarly examination of African American women writers marketed to popular audiences and expands the study of African American women's contemporary activism, health activism, and black student activism.