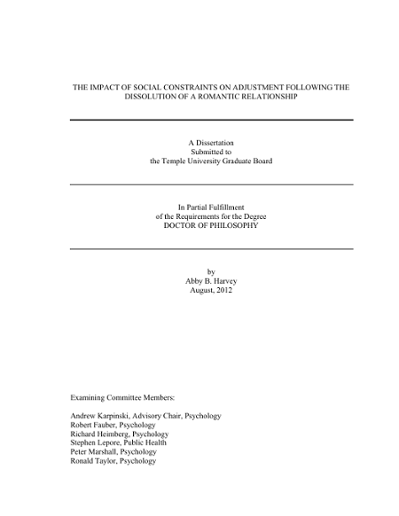 Many people experience a romantic breakup at some point in their lives, but people's reactions can vary considerably. A common way of coping with the dissolution of a romantic relationship is to seek support and opportunities to talk with close others. Although talking with social network members may prove helpful for some, the Social-Cognitive Processing (SCP) model posits that interpersonal interactions can hinder emotional recovery and adjustment if the disclosers feel the social network members are responding in a socially constraining way. As a result of perceiving social constraints, individuals may try to avoid thinking and talking about the breakup altogether, which, in turn, may interfere with the cognitive processing necessary to move forward from the breakup. The current research marked the first time the SCP model was explored with regards to the dissolution of romantic relationships, and it evaluated the utility of the SCP model in potentially explaining the variable nature of adjustment to a romantic breakup. One hundred and seventy-four eligible participants completed this online study. Participants completed various questionnaires pertaining to their previous relationship and subsequent breakup, their feelings and experiences following the romantic dissolution, their tendencies to think about the breakup, and the degree to which they discussed the relationship dissolution with others and the reactions they received during these conversations. In support of the SCP model, the results indicated that social constraints were associated with greater psychological distress. Furthermore, avoidance partially mediated the relation between social constraints and psychological distress as levels of social support decreased. This suggests that higher levels of social support might help buffer against engaging in avoidance in response to social constraints. In an initial attempt to examine whether the extent of avoidance displayed varied as a function of a dispositional variable (i.e., self-monitoring), no support was found. Future research should continue to investigate additional factors that may moderate the relation between social constraints and psychological distress through avoidance.