Realism in Pain: Literary and Social Constructions of Victorian Pain in the Age of Anaesthesia, 1846-1870 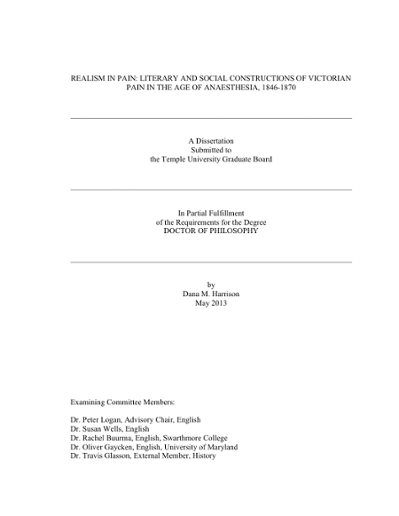 In 1846 and 1847, ether and chloroform were used and celebrated for the first time in Britain and the United States as effective surgical anaesthetics capable of rendering individuals insensible to physical pain. During the same decade, British novels of realism were enjoying increasing cultural authority, dominating readers' attention, and evoking readers' sympathy for numerous social justice issues. This dissertation investigates a previously unanswered question in studies of literature and medicine: how did writers of social realism incorporate realistic descriptions of physical pain, a notoriously difficult sensation to describe, in an era when the very idea of pain's inevitability was challenged by medical developments and when, concurrently, novelists, journalists, and politicians were concerned with humanitarian reforms to recognize traditionally ignored and disadvantaged individuals and groups in pain? By contextualizing the emergence of specific realist novels including works by Elizabeth Gaskell, Charles Reade, William Howard Russell, and Charles Dickens, within larger nonfiction discourses regarding factory reform, prison reform, and war, this dissertation identifies and clarifies how realist authors, who aim to demonstrate general truths about "real life," employed various descriptions of physical pain during this watershed moment in medicine and pain theory, to convince readers of their validity as well as to awaken sympathetic politics among readers. This study analyzes Gaskell's first industrial novel, Mary Barton (1848), Reade's prison-scandal novel, It is Never Too Late to Mend (1856), Russell's Crimean War correspondence (1850s) and only novel, The Adventures of Doctor Brady (1868), and Dickens's second Bildungsroman, Great Expectations (1861), thereby revealing different strategies utilized by each author representing pain - ranging from subtle to graphic, collective to individualized, urgent to remembered, and destructive to productive. This study shows how audience expectations, political timing, authorial authority, and medical theory influence and are influenced by realist authors writing pain, as they contribute to a cultural consensus that the pain of others is unacceptable and requires attention. These realist authors must, in the end, provide fictionalized accounts of pain, asking readers to act as witnesses and to use their imaginations, in order to inspire sympathy.