Ethical Life and Ontology in Hegel's Phenomenology of Spirit 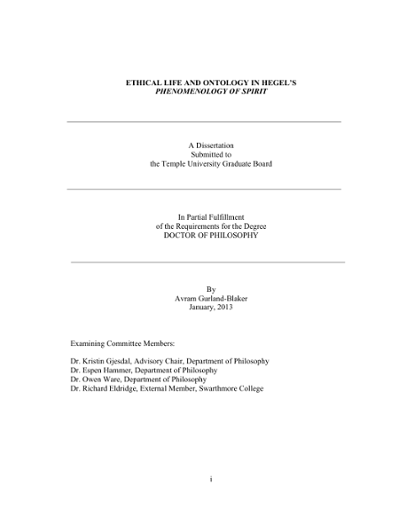 I develop a connection between Hegel's account of Ethical Life (Sittlichkeit) and his ontology, arguing that Ethical Life draws out some of the more intuitive and subtle sides of Hegel's ontology on the one hand, and some of its more ambitious and challenging aspects on the other. Ethical Life, for Hegel, signifies our lived, normative, concrete social reality; my central claim is that Hegel uses this account to illustrate (and support) some of his key ontological convictions. I begin by showing how Ethical Life figures centrally in Hegel's attempt to ontologically prioritize intelligibility. Chapter One is devoted to Hegel's case for this ontological priority: essentially, the argument is that we ought to accept (and implicitly already do accept) the adequacy of thought to being, and that this adequacy entails that the object in its fully experienceable multilayered depth is its fundamentally "real" form. I then argue, in Chapter Two, that Ethical Life develops an account of the Self-World relation better able to accommodate a world of such intelligible objects: Ethical Life premises itself on "Self-World mutual-constitution," where Self and World each are what they are in virtue of the greater relation between them. This integrated relationship, this greater whole, becomes the ground on and out of which such intelligible objects can emerge, develop, and sustain themselves. The dissertation's second half further defines key strands of Hegel's ontology, such as the demand that a philosophically viable ontological model be a wholly self-contained and self-explanatory, self-supporting and self-determining, intelligibility- and process-oriented totalistic whole. This demand comes out, for example, in Hegel's critique of Kant, which is the topic of Chapter Three. There, I argue that Hegel charges Kant with an ontological conservatism, with retaining "pure" forms of subjectivity and objectivity, the possibility of which had been made questionable by the transcendental turn. Hegel instead suggests that we drop such problematic notions as Things-in-themselves or Pure Concepts of the Understanding, opting instead to simply recast the experienced world as conceptually determined appearances per se. The conceptual self-determination of appearances, meanwhile, is something Hegel will associate with his notion of Reason, and in Chapters Four and Five, I consider the relation of Ethical Life to this notion of Reason. Hegel characterizes Ethical Life as "actual Reason," and I argue in Chapter Four that the currently prevalent, non-metaphysical readings of Hegel's social thought (what I call the rational justifiability reading) are incomplete to the extent that they fail to adequately integrate into their account the fact that Reason, for Hegel, is (among other things) an ontologically operative principle. Hegel identifies Reason with the experienced world's conceptual self-determination, or with the intelligible framework which structures, animates, and stabilizes the experienced world. This identification is essential to Hegel, in that it methodologically opens up the possibility of developing an account that not only can be intellectually identified with the experienced world, but can be directly, experientially recognized in (or as) the experienced world. In Chapter Five, I argue that Ethical Life plays a key role here by offering an account --even an illustration-- of Reason in its operation as the experienced world's conceptual self-determination. Custom and Fate, two concepts encountered in Ethical Life, portray an uncomprehending intuition of the experienced world's conceptual self-determination in the moment of its concrete operation; the "internal" experience of this process described in Ethical Life also displays how intelligible principles can immanently sustain and determine the experienced world. Ethical Life, I ultimately argue, brings Hegel's ontology down to earth, so to speak. Through Ethical Life, we come to see that a number of Hegel's less-familiar and more seemingly foreboding claims can be associated with recognizable phenomena, or even identified with the experienced world. Yet, simultaneously, recognizing this connection helps us appreciate the ambition of Hegel's challenge to us to reconsider our presuppositions: we experience reality to be richly complex yet intelligibly ordered --Hegel's ontology asks us now to take seriously the implications of the possibility of our experience's being a veritable revelation of reality.