Accessible Isolation: Highway Building and the Geography of Industrialization in North Carolina, 1934-1984 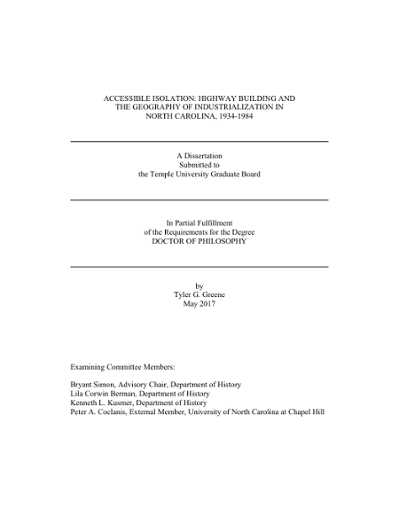 Between the 1930s and mid-1980s, North Carolina became one of the most industrialized states in the country, with more factory workers, as a percentage of the total workforce, than any other state. And yet, North Carolina generally retained its rural complexion, with small factories dispersed throughout the countryside, instead of concentrated in large industrial cities. This dissertation asks two essential questions: first, how did this rural-industrial geography come to be, and second, what does the creation of this geography reveal about the state of the American political economy in the post-World War II era? I argue that rural industrialization was a central goal of North Carolina’s postwar political leaders and economic development officials. These industry hunters, as I call them, wanted to raise their state’s per capita income by recruiting manufacturers to develop or relocate operations in North Carolina. At the same time, they worried about developing large industrial cities or mill villages, associating them with class conflict, congestion, and a host of other ill-effects. In the hopes of attracting industry to its countryside, the state invested heavily in its secondary roads and highways, increasing the accessibility of rural communities. In their pursuit of rural industrialization, however, North Carolina also constructed a political economy that anticipated the collapse of the New Deal state. While historians typically see New Deal liberalism as the prevailing form of statecraft in the postwar United States, North Carolina achieved economic growth through a model that state officials termed “accessible isolation.” What accessible isolation meant was that North Carolina would provide industries with enough of a state apparatus to make operating a factory in a rural area possible, while maintaining policies of low taxes, limited regulations, and anti-unionism, to make those sites desirable. Essentially, industry hunters offered industrial prospects access to a supply of cheap rural labor, but isolation from the high wages, labor unions, government regulations, and progressive tax code that defined New Deal liberalism. Accessible isolation was attractive to businesses in postwar America because it offered a “business-friendly” alternative to the New Deal, and factories began sprouting throughout rural North Carolina. But the success of accessible isolation was built on a shaky foundation. Indeed, most of the employers persuaded by its promises were those in low-wage, labor-intensive industries, making North Carolina’s rural communities especially vulnerable to transformations in the global economy by the late twentieth century.