The Black Manifesto and the Churches: The Struggle for Black Power and Reparations in Philadelphia 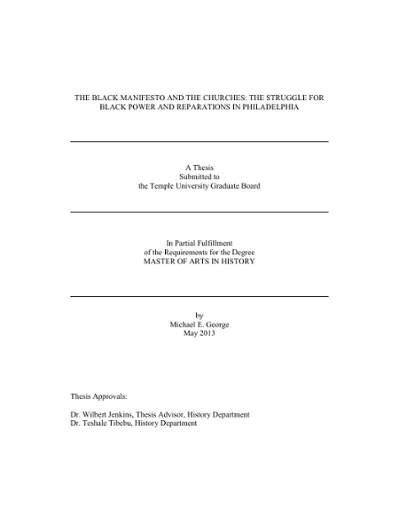 James Forman's Black Manifesto demanded $500 million in reparations from the nation's white churches and synagogues for their financial, moral, and spiritual complicity in the centuries of injustice carried out upon African Americans. Many African-American ministers in the North embraced the Black Power ideology and supported Forman's call for financial redress. These Northern clergymen had become exasperated with an interracial civil rights movement that neglected to confront the systemic racism that permeated the nation's culture. Black Manifesto activists attempted to compel the white churches into paying reparations by interrupting worship services and occupying church buildings throughout the urban North. While the vast majority of the American public believed that the Black Manifesto was simply an attempt to extort money from the white churches, there was a racially diverse contingent of clergymen who wholeheartedly supported the call for reparations. The primary reason that Philadelphia became one of the key arenas in the struggle for reparations was the presence of Muhammad Kenyatta, the local Black Economic Development Conference leader. Kenyatta implemented myriad confrontational tactics in an attempt to cajole the Philadelphia-area denominations into responding affirmatively to the Black Manifesto's demands. The young activist was able to form an alliance with influential leaders within the Episcopal Diocese of Pennsylvania. Paul Washington, an African-American minister, and Bishop Robert DeWitt, a white clergyman, supported the Black Manifesto and encouraged their fellow Episcopalians to do likewise. The duo's support for the Black Manifesto encouraged the Episcopalians to become the first predominantly white denomination to pay reparations to the Black Economic Development Conference. Although the payment was just $200,000, the concept of supporting a militant African-American organization was more than many conservative Episcopalians could tolerate. The debate over the Black Manifesto at the denomination's 1969 Special General Convention also enabled many African-American ministers to express long-held grievances regarding racism in the Church. A detailed examination of the rancorous debate over the Black Manifesto in Philadelphia complicates any simplistic narrative of the struggle for racial justice in the North. While many historians have blamed Black Power activists for derailing the civil rights movement, this study reveals that the fight against structural racism in the North generated political unity among African Americans that has lasted to the present day. The conflict among Philadelphians over the Black Manifesto was in no way split along racial lines. Many of document's most vehement supporters were white while many of its greatest detractors were conservative African Americans. The dispute over the Black Manifesto in Philadelphia illuminates the intellectual diversity present within the African-American population as well as the Black Power movement itself.