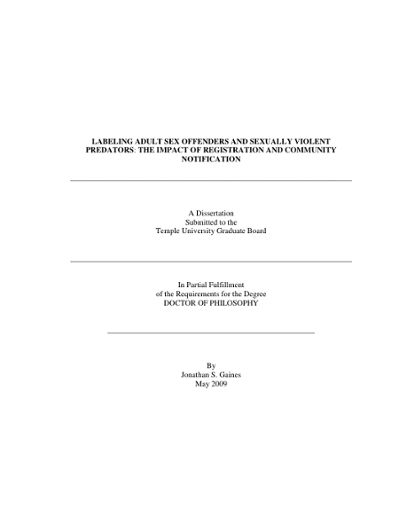 When released from prison, sex offenders are typically required to register with designated law enforcement officials as a condition of their parole. These officials can warn local community members, organizations, and establishments of the offender's incoming presence. Research indicates that community notification can adversely affect sex offenders in terms of their interpersonal and family relationships, employment opportunities and housing, and can lead to offender harassment that extends to the family members of sex offenders (Burchfield & Mingus, 2008; Levenson & Cotter, 2005a, 2005b; Levenson, D'Amora, & Hern, 2007; Tewksbury, 2004, 2005; Tewksbury & Lees, 2007; Zevitz & Farkas, 2000b). The current analysis seeks to build on and extend the existing literature by investigating the consequences of sex offender registration and community notification from the perspective of registered sex offenders and sexually violent predators in Pennsylvania. Using multiple methods of data collection (i.e., survey and interview research) and analyses, the present study contributes to the current understanding of how sex offenders experience registration and community notification and focuses on the positive and negative effects (e.g., unintended and unanticipated consequences) of being labeled and subject to community notification. Data for the present study were collected in collaboration with four providers of sex offender treatment. These treatment facilities are non-profit mental health organizations that provide both outpatient examinations and treatment services for sex offenders. All treatment providers are located in Pennsylvania, and will remain anonymous in the current study. The survey sample consists of 200 adult male sex offenders. For the purposes of making comparisons, 181 of the sampled sex offenders were further classified as the following three subsamples: (1) registered sex offenders (RSOs) (n = 121), (2) sexually violent predators (SVPs) (n = 13), and (3) non-registered sex offenders (and non-sexually violent predators) (n = 47). Nine of the SVPs elected to participate in the face-to-face interview portion of this research where topics focused on the impact of active community notification, the process whereby the state police are required to mail out letters to community members about an offender's physical description and home address. The age of the interview sample ranged from 35 to 63, and the average was 49.22 years old. Descriptive results of the complete survey sample reveal that most sex offenders are White or African American, middle-aged, and not married, and have relatively little formal education. Most sex offenders are working in some capacity, self-identify as "working class," and earn less than $20,000 per year. The majority of the total sample of sex offenders has been convicted of indecent assault/indecent sexual assault (24.6%) followed by possession of child pornography (12%) and then rape (11.4%). Overall, most victims are minor-aged females who were known by - but not related to - the offender. Findings from the anonymous survey also indicate that over 40 percent of the sampled RSOs are restricted by a 1,000-foot-rule, have primary group members who sustained some type of harm, and have had meaningful, personal relationships severed. Sexually violent predators experienced job loss, denial of employment, loss of housing, and denial of a place to live, and were treated rudely in public, and had primary group members who experienced emotional harm and, separately, had personal relationships severed at a higher rate (i.e., at least 10 percentage points) than RSOs. None of the SVPs were physically assaulted, whereas six RSOs (i.e., 5 percent of 120 RSOs) were physically assaulted. Using only a combination of two of the three subsamples of sex offenders (i.e., RSOs and SVPs), the multivariate contingency table analyses assessed how sex offenders' selection of victim-type, relationship to victim, and race influenced the fifteen different economic, residency-related, and harassment outcomes. Specifically, if offenders victimized a child (i.e., victims from age 5 to 17), as opposed to an adult (i.e., 18 or older), they were significantly more likely to be restricted by a 1,000-foot-rule, as expected. Offenders who victimized children were also more likely than offenders who victimized adults (by at least 10 percentage points) to experience job loss and receive harassing telephone calls, and to have primary group members who sustained some form of emotional harm and, separately, have personal relationships severed. Findings gleaned from the interviews indicate that SVPs are experiencing several of the problems identified in the previous and related literature. Specifically, six of the interviewees (66.67 percent) indicated that, since the notification process began, they have had a difficult time locating and obtaining affordable housing. Analysis of covariance (ANCOVA) was used to examine the effect of sex offenders' socio-demographics, offender characteristics, victim characteristics, and negative experiences resulting from registration and/or notification on self-esteem (Rosenberg, 1965), mastery (Pearlin et al., 1981; Pearlin & Schooler, 1978), stigma (Link, 1987; Link et al., 1997), and depression using the Center for Epidemiologic Studies Depression Scale (CES-D). The multivariate regression results were quite unexpected. After controlling for sex offenders' sociodemographics, offender characteristics, and victim characteristics, none of the scales devised to measure the impact of registration and/or community notification significantly predicted any of the four outcomes. The significance of these findings for criminological theory, and offender rehabilitation and reintegration are discussed.