Sleep problems and school competence: Transactional relations across middle childhood and the effects on children's adjustment 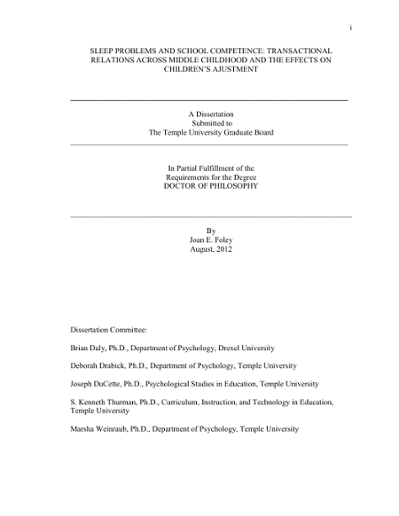 Despite evidence suggesting considerable overlap between the neurobiology underlying sleep regulation and the neurobehavioral systems regulating attention control and emotional arousal, sleep remains an understudied domain in the quest to improve children's regulation of behavior, emotions, and cognition in support of school competence during middle childhood. Using a large, normative sample (n = 1,057) from the National Institutes of Child Health and Human Development's Study of Early Childcare and Youth (NICHD-SECCYD), I tested a conceptual model of sleep, school competence, and children's adjustment to address important gaps in our understanding of the direction of effects and interrelations among sleep problems, attention problems, and academic and social competence across middle childhood. I examined the domains for their combined effects and pathways of influence on children's adjustment (e.g., depressive symptoms and feelings about school) at the end of middle childhood--a period just prior to the impending biological and contextual changes associated with adolescence. Using structural equation modeling and repeated measurement at 54 months-of-age, Grade 1, Grade 3, and Grade 5, findings indicated that maternal-reported sleep problems in preschool directly predicted teacher-reported attention problems when children were in third and fifth grade. Findings lend support for models of sleep and neural development that posit adverse early effects of sleep problems on prefrontal cortex (PFC) maturation that aids in the development of attention control. Maternal-reported sleep problems did not predict standardized assessments of reading and math at any time across the assessment period. In contrast, sleep problems predicted teacher reports of children's ability to effectively cooperate and execute positive response strategies with peers. Effective language and cognitive skills are important and necessary for positive peer interactions and problem solving, and sleep problems have been associated with slower growth in language development and memory processes. Both maternal-reported sleep problems and teacher-reported peer relations uniquely predicted children's self-reported depressive symptoms, perceived competence, and motivation and social support in school at the end of middle childhood. Findings lend support for an emotion information processing model of sleep and competency-based models of depression. Academic achievement and attention problems and attention problems and peer relations were reciprocally related at all assessment periods. In support of the academic underachievement hypothesis, academic achievement consistently exerted stronger effects on attention problems compared to inverse relations. Attention problems and academic achievement had no direct effects on children's depressive symptoms or motivation for school, but exerted indirect effects through their effects on peer relations. Despite expected relations, no domain in the present study predicted children's sleep problems. Even though results are somewhat surprising given theoretical perspectives and limited empirical work investigating associations between sleep problems, attention problems, and academic and social competence, this study was novel in its design for simultaneously evaluating effects of these domains together across time. Findings from the present study may fail to align with prior research because multiple domains were allowed to compete with one another in a single model, and shared rater variance as well as prior and concurrent levels of each domain were controlled across the study period. Alternatively, variables not measured in the present study but associated with children's sleep problems, such as child temperament or parenting practices, may be stronger predictors of children's sleep. In sum, results point to the unique associations between children's sleep problems, attention problems, and academic and social competence across middle childhood, and the importance of considering their combined influence on children's feelings of adjustment as they enter the challenging period of adolescence.