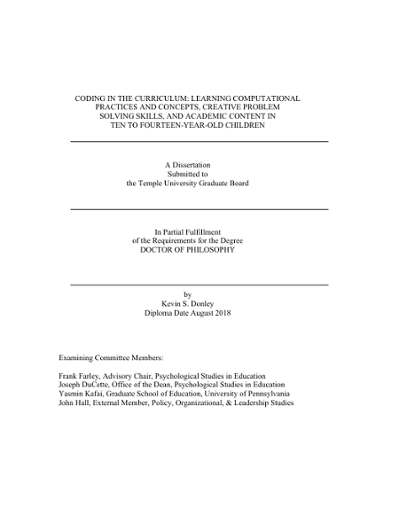 The fundamentals of computer science are increasingly important to consider as critical educational and occupational competencies, as evidenced by the rapid growth of computing capabilities and the proliferation of the Internet in the 21st century, combined with reimagined national education standards. Despite this technological and social transformation, the general education environment has yet to embrace widespread incorporation of computational concepts within traditional curricular content and instruction. Researchers have posited that exercises in computational thinking can result in gains in other academic areas (Baytak & Land, 2011; Olive, 1991), but their studies aimed at identifying any measurable educational benefits of teaching computational concepts to school age children have often lacked both sufficient experimental control and inclusion of psychometrically sound measures of cognitive abilities and academic achievement (Calao, Moreno-León, Correa, & Robles, 2015). The current study attempted to shed new light on the question of whether using a graphically-based computer coding environment and semi-structured curriculum –the Creative Computing Course in the Scratch programming language –can lead to demonstrable and significant changes in problem solving, creative thinking, and knowledge of computer programming concepts. The study introduced 24 youth in a summer educational program in Philadelphia, PA to the Scratch programming environment through structured lessons and open-ended projects for approximately 25 hours over the course of two weeks. A delayed treatment, control trial design was utilized to measure problem solving ability with a modified version of the Woodcock-Johnson Tests of Cognitive Abilities, Fourth Edition (WJ-IV), Concept Formation subtest, and the Kaufman Tests of Educational Achievement, Third Edition (KTEA-3) Math Concepts and Applications subtest. Creative problem solving was measured using a consensual assessment technique (Amabile, 1982). A pre-test and post-test of programming conceptual knowledge was used to understand how participants’ computational thinking skills influenced their learning. In addition, two questionnaires measuring computer use and the Type-T (Thrill) personality characteristic were given to participants to examine the relationship between risk-taking or differences in children’s usage of computing devices and their problem solving ability and creative thinking skills. There were no differences found among experimental and control groups on problem solving or creative thinking, although a substantial number of factors limited and qualified interpretation of the results. There was also no relationship between performance on a pre-test of computational thinking, and a post-test measuring specific computational thinking skills and curricular content. There were, however, significant, moderate to strong correlations among academic achievement as measured by state standardized test scores, the KTEA-3 Math Concepts and Applications subtest, and both the pre and post Creative Problem Solving test developed for the study. Also, higher levels of the Type T, or thrill-seeking, personality characteristic were associated with lower behavioral reinforcement token computer “chips," but there were no significant relationships among computer use and performance on assessments. The results of the current study supported retention of the null hypothesis, but were limited by small sample size, environmental and motivational issues, and problems with the implementation of the curriculum and selected measures. The results should, therefore, not be taken as conclusive evidence to support the notion that computer programming activities have no impact in other areas of cognitive functioning, mathematic conceptual knowledge, or creative thinking. Instead, the results may help future researchers to further refine their techniques to both deliver effective instruction in the Scratch programming environment, and also target assessments to more accurately measure learning.